June 26, 2012June 5, 2014 • Caitlin
On our third day in India, we went to the Taj Mahal.  Our original plan had been to arrive for sunrise, but we ended up sharing chai masala with some other guests at our homestay and missed the sunrise by about 15 minutes…whoops!  I don’t think we missed too much though since the sun does not actually rise behind the Taj.  It reminded us a bit of our sprint to the sun gate only to realize that the sun is blocked by a the mountains around Machu Picchu…
Even though we missed the actual sunrise, arriving super early at the Taj was a blessing because it was still relatively cool and there were far fewer people wandering around.  We had a chance to take a lot more pictures and were even able to serenely sit under a tree and enjoy a peaceful and quiet view of the mausoleum.
The Taj Mahal is an amazing piece of architecture.  A 17th century building, it was built by a Mughal emperor in memory of his favorite wife, who died during childbirth.  It’s especially impressive because it sits on the bank of the Yamuna river which means that the views of the Taj never have anything behind them…just sky.  It also happens to be smack dab in the middle of the busy/dirty city of Agra, a contrast which definitely adds to its peacefulness. 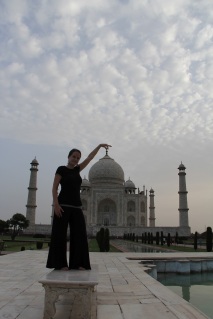 We spent roughly 2.5 hours wandering around the Taj and it’s various side buildings, but don’t think we stopped there!  After heading back to our homestay for breakfast, we spent the rest of the day visiting all sorts of sights around Agra that you can see the Taj from!
We even opted for Taj Round 2…going back at night!  A few days each month, they allow small numbers of tourists into the site during the full moon.  By a stroke of luck (or so we thought), we happened to be there during the full moon so we signed up for the “moonlight tour.”  The whole process was a bit ridiculous as we went through something like 5 different security checkpoints, were frisked twice, run through several metal detectors, and then led into the main gate with half an army of armed guards.  At least that part was entertaining though since the “moonlight” aspect of the tour left a bit to be desired…the moon was beautiful…and behind our right shoulders as we stood looking at the Taj.  We snapped a few photos and then mostly enjoyed the tranquility of the mausoleum at night…before the half army marched us back out when our allotted 30 minute time limit was up.
Advertisement

One thought on “The Taj Mahal”