September 19, 2010June 5, 2014 • Caitlin
Next stop on the trip?
Lima
We spent a last few days with Jesus before he had to catch his plane back to the States….mostly drinking as much Starbucks as humanly possible and eating enough seafood to make us want to barf.
We also managed a journey into the center of town to see the presidential palace, the changing of the guard, some old churches and a whole lotta bones. 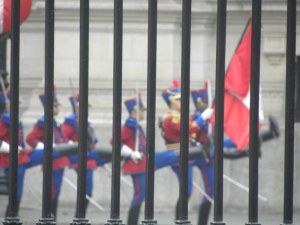 I was allowed to take pictures in the sanctuary of this church, but not in the catacombs which is too bad because they were soooo cool!
Tens of thousands of people were buried in mass graves underneath this church and in recent years someone decided it was a good idea to sort all the bones so we took a tour through the basement marveling at giant pits of femurs, pelvises, and skulls.
There was even one circular pit where the bones had been laid out in a concentric pattern!
I’m pretty sure Alex and Jesus think I’m insane for finding this so fascinating and I know that Alex felt a bit nauseous by the end, but if you ever go to Lima I highly recommend the Iglesia de San Francisco!

We ate ceviche several times, but usually managed to forget to take a photo until our plates were empty. Here is the one time we remembered to snap a picture before we started stuffing our faces! 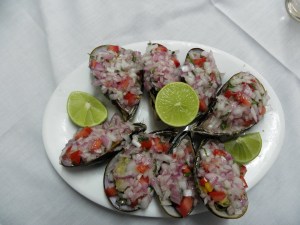 One thought on “Lima”