September 17, 2010June 5, 2014 • Caitlin
After the Nazca lines, we caught yet another bus and headed further north along the coast of Peru, ending up in the city of Ica. We mostly stopped here because we wanted to visit the desert and go sandboarding in the nearby oasis town of Huacachina. Ica itself does not have a lot going on and felt a bit dirty and dangerous (although I’m sure that was biased by the fact that I was pretty ready to be in Lima at this point).
We wandered the city a bit, ate some ok pasta, drank some awful wine, and slept in the hotel above the bus station, before taking a cab over to Huacachina the next morning.
Huacachina is basically a tiny tourist trap of a few hotels and restaurants built around an oasis in the middle of the desert. The main activities appear to be getting wasted and sandboarding. We passed on the getting wasted part and instead got an entire dune buggy to ourselves (most likely due to the fact that all the people who were wasted the night before were too hungover to get up as early as we did).

The dunes were beautiful…we felt like we could see forever! 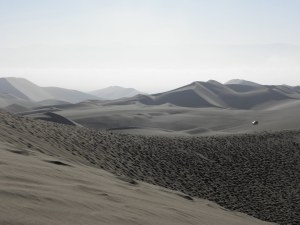 The dune buggy could theoretically fit 9 passengers plus our driver so we got lots of choices for where we wanted to sit.
The ride was a lot like a roller coaster which pretty much made me terrified, especially because my Spanish is a lot better than it used to be and I understood everything when Jesus was asking the driver about how often the buggies flip over.
Our driver assured us he’d been driving dune buggies for a really long time though and we managed to make it through the morning without any mishaps.

Unlike some places where we’ve seen sandboarding tours, the boards here were basically just curved plywood instead of old snowboards.
Alex thinks this made sandboarding a lot harder than it needed to be since the boards were so heavy. He went down the dunes a few times on his feet, but felt like it was really hard to control the board since it got weighed down by the sand really easily and he couldn’t really jump with the board.

Jesus and I never even bothered with that silly standing technique…we went straight for sledding style which was super fun and made me miss Wisconsin winters (but just a little bit).
I was definitely shaking sand out of my pockets, shoes, socks, ears, whatever for days later, but it was totally worth it! 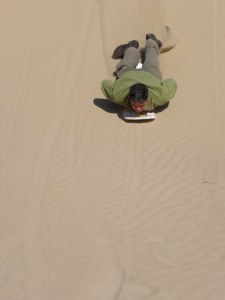 On a side note…the day we went sandboarding happened to be our one year anniversary as well…not a bad way to celebrate our first year together!
Advertisement

3 thoughts on “Sandboarding in Huacachina”