September 14, 2010June 5, 2014 • Caitlin
After Arequipa, our next stop was Nazca, not a place worth visiting for long, but the jumping off point for seeing the Nazca lines, giant pre-colombian glyphs carved into the desert. Nobody is really sure how or why these glyphs exist (some speculate it was aliens), but nonetheless they are amazing, especially considering the civilization that created them had no way of going up in the air to view them (unless of course they were aliens with UFOs).
I had heard some pretty scary horror stories about motion sickness on the small plane tours over the Nazca lines. Since ceiling fans and flickering TV screens have the ability to make me motion sick, I figured zipping back and forth in a tiny plane that’s doing circles over the desert was maybe not the best idea. I waited in the airport while Alex and Jesus went up instead.
I was a bit sad not to see it in person, but the pictures they took of all the different glyphs were pretty cool. And I watched a girl we had seen at the airport throw up on the sidewalk as we were eating breakfast so I’m pretty sure I made the right decision.
The airport in Nazca is tiny and basically has about 6 small tourist airlines with planes that fit 4-8 people in them.

I know there’s nothing for size reference here, but these things are huge! 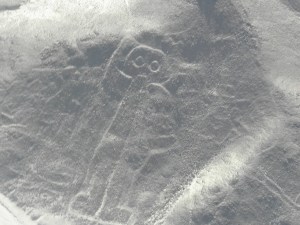