August 15, 2010June 5, 2014 • Caitlin
Did you know that flamingos are pink because of the micro-organisms they eat? There is a red lake in the highlands of Bolivia called Laguna Colorada because it often looks red due to the red color of the micro-organisms in the lake. The flamingos migrate here from Argentina, eat the organisms and turn pink! There are also flamingos in several of the other altiplano lakes in Bolivia.
So anyway…I took “a few” pictures….seriously though, how many times do you get to see flamingos in the wild!?!? 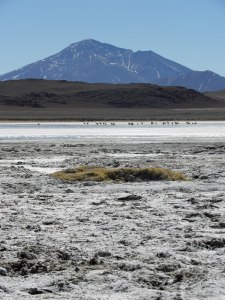 This one must not have eaten enough red micro-organisms!
Actually, our guide explained that flamingos shouldn’t really be in the salt flats in July because they should have migrated south to Argentina. Those that stay risk getting frozen into the shallow water when it freezes and then they starve to death.
We were very concerned that this flamingo was frozen, but he moved a few minutes after we arrived at the lake.

I have about 400 more pictures, but you get the idea..
Advertisement