This morning I did one of, if not the hardest physical thing I have ever done in my life, I climbed Cotopaxi. As you many of you know I attempted Cotopaxi before about three months ago and was unable to summit because of an injury to one of our guides. Well today I had another shot at it. This time around it was just Eric and I who were going to attempt it. So yesterday morning we picked up our guide at 9am and headed to Cotopaxi. Upon arriving at Cotopaxi we threw on our backpacks and hiked up to the refuge where we would be spending time before starting the hike. While waiting at the refuge we learned about how we would be hiking on the glacier and what to do if one of us fell into a crevasse. After learning about how we were going to be going up, we ate dinner and headed to bed at 6pm since we were going to start the hike at midnight. We crawled into our sleeping bags and tried to sleep which was harder than one would think between the early hour and the 4800m. of altitude. We were able to slip in and out of sleep and get some rest before getting up to begin our hike at midnight. As we were getting dressed and suited up Eric kept singing “Tonights going to be a good night” which at the time seemed humorous and as we were both in good spirits seemed fitting. The hike began similar to the previous time in pitch dark, however this time there was no sleeting rain so we thought it was a good sign. We got to the glacier with no falling rocks and seemed to be ahead of the majority of the groups leaving the refuge. As we strapped on our crampons and got out our ice axes it seemed like we were really going to make it this time. So we forged on in the dark roped into each other and getting used to a single pace for the three of us. We passed an ice cave and all three of us were feeling fine. It continued like this until about 3:30am when I started to feel the altitude and the exhaustion. It was also about this time when mother nature decided to throwing gusting winds at us that kept knocking us off our feet or the trail. Both were not fun experiences. We were thinking of taking a break around this time but due to the strong winds and lack of coverage we had to forge on. Here is when I started to ask myself why am I doing this? I finally began to understand what our friend Jake kept telling me about mountaineering. To quote Jake “Mountaineering is like being hungover, with a plastic bag on your head as you run a marathon and bang your head against a wall all at the same time.” As I continued this grueling experience I kept telling myself “Just keep going until the sun comes up”, “I can push myself through anything”, “This is what I’ve been training for”, “You gotta keep going, Eric is still going” these positive thoughts quickly changed into “I’m going to die up here”, “What if I just layed down for awhile”, “Why am I doing this”, “This is the stupidest sport ever”, “WTF, WTF, WTF, WTF”. As you can see I spent far more time being negative about the experience then positive. It was about 5:00am when the guide told us we were almost there and the top wasn’t far. This incited the thought that if he is lying I am going to make him carry my down this glacier, I didn’t tell him this as I was weezing for air and didn’t want to waist the energy. The last hour felt like five and the top kept seeming to get farther away than I pictured it. But I figured I was not going to get this close only to go down and regret it and have to do it again. At about 6:20am we arrived at the top. After realizing that what I saw was not a mirage I quickly became elated. We congratulated each other and hugged. We pulled out water and chocolate to try to recharge a little before hiking down. After which we pulled out the big puffy jackets we had been carrying and put them over our other jackets to avoid getting too cold and I began to take some pictures. Unfortunately it was so windy at the top that a lot of the pictures didn’t turn out. I have posted the best ones from the top and on the way down. the way down was far easier than the way up and more enjoyable because there was better visibility and because I was so exhausted that I no longer felt pain. I kept picturing myself as a muppet flouncing down the mountain. Because the exhaustion in my muscles did not allow me to stop them from whipping as we hiked down.

Me before the hike. Who said ignorance isn’t bliss.

View of Tumbaco from the Refuge as we began our hike. 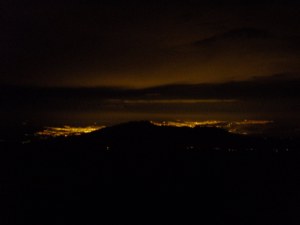 The view the whole way up. 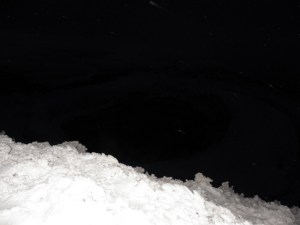 The Crater at the top of the Volcano. It is so blue because the sun hadn’t fully come up.

Eric and I at the top of the mountain facing Cayambe. You can see the slight peak over my left shoulder. 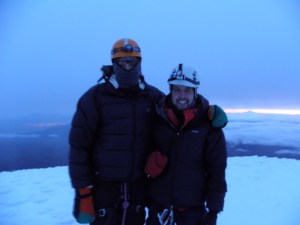 Some of the ice formations close to the top. Chimborazo in the background. 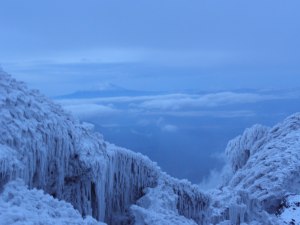 Antisana poking out above the clouds. The clouds look like the connect to the snow and it would be nothing more than a short walk over. 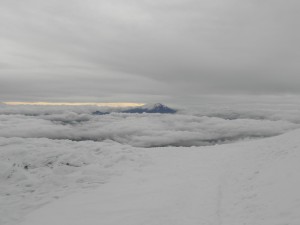 Close up of Antisana.

Antisana and Cayambe as the sun was coming up. This is on our hike down.

Illinizas from a different view.

Our hike down. You can see in the distance one of the groups that made it to the top before us. Out of the 30 some groups that started only 4 made it.

Coming down on the glacier.

View from the parking lot from below. 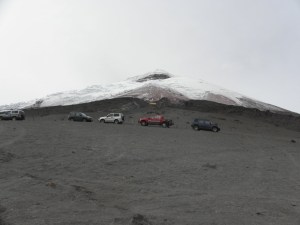