February 22, 2009June 5, 2014 • Caitlin
Last weekend Alex and I decided to head out of town for Valentine’s Day. The beach at Tela is super close (only about 1.5 hours away) and we feel like we don’t go there nearly as much as we should. The tourism companies in Tela have several day trips that you can sign up to go on so we figured we’d spend the day on a tour and then stay the night relaxing and enjoying being away from home.
In the past we signed up to do Punta Sal for the sake of seeing monkeys, but Punta Izopo is a tour that we had been meaning to do for almost a year and hadn’t gotten around to yet so we opted for the new and different this time. The trip consisted of riding in a truck for about half an hour through the second largest Garifuna community in Honduras, taking two person kayaks out on the Rio Platano for a few hours to bird watch and look for cocodrilos, then heading back to the Garifuna community for traditional lunch on the beach.
The Garifuna people are decendents of West Africa that populate much of the coastal area of Honduras. The community we visited is called Triunfo de la Cruz and is made up of approximately 8,000 people. One of my absolute favorite meals is the traditional Garifuna meal of whole fried fish, fried plantains, and red beans and rice.
There was lots of wildlife during the trip including caymans, crocodiles, lots of herons, morpho butterflies, and even a toucan flying across the river! We heard howler monkeys too, but never managed to find which tree they were in.

Me in the mangroves….and look Mom and Dad, I’m wearing a PFD!!! 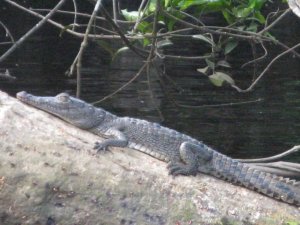 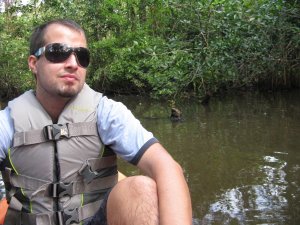 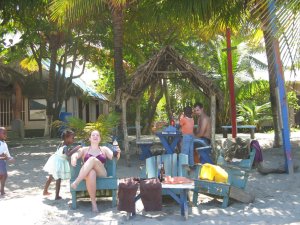 We made some small friends while we waited for our lunch. They had a blast putting on Alex’s sunscreen although were not very consistent about it. My favorite was the little one who had a blob on the back of his head and one shin completely covered…

I heart the playa!