August 22, 2008June 5, 2014 • Caitlin
I’m sure many of you have heard that we loooved the trip we took in August. The island was old, colonial, and filled with culture. We trekked all around the capitol each day to see museums, famous hotels and restaurants, old forts and castles and just enjoy the atmosphere in general. It was incredibly hard to narrow down the ridiculous amount of pictures we took, but hopefully these few will give you an idea of what we experienced.

Our first night in town included a rain storm…beautiful! 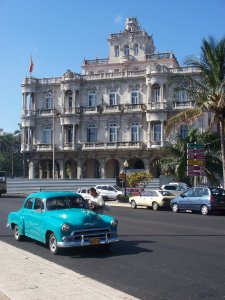 I think we decided this was the Spanish Embassy…if not, then just a very pretty building with the Spanish flag flying in front of it!

The city was full of interesting old buildings!

A typical street.
Most of the street levels of buildings are either shops or courtyards, while the upper levels are living spaces. Much door to door work is done by rope and pully. We watched a knife sharpener receive knives in a bag lowered on a rope, sharpen them on the street and then return them in the bag back up to the second story.

On our way back to our bed and breakfast for a siesta. Rather than stay in hotels, we stayed with families. There is an entire network of bed and breakfast type places that rent out rooms to tourists. Not only was this less expensive, but it was a great resource for information when we had questions about what to do or see!

A big mirror in a big room with a cool ceiling makes for a cool picture!
This room was at one of the major museums in the city. We got a chance to learn a lot about the history of the country right along with a school group on a field trip.

Coco Taxis!
There were many modes of transportation available to get us around the city including: Coco Taxi, BiciTaxi, Horse Carriage, and Car Taxi. The tank was not available to drive us around…

It was at least a million degrees every day so we stopped often for drinks in the shade.
Drink of choice at this restaurant? Mojito!

Restaurants are expensive!
So instead we bought a giant avocado in this market and a loaf of bread to go along with it…delicious. 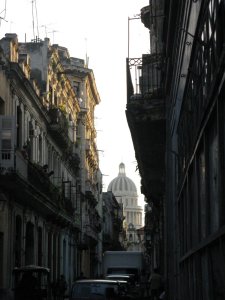 A view of the Capitol.
Both the houses we stayed at were within walking distance of the Capitol. At night it is completely lit up and one of the evenings there was even a block party on the street in front of it!
Advertisement