August 16, 2008June 5, 2014 • Caitlin
While we were in Panama, we decided to visit the San Blas Islands. These islands are also sometimes referred to as the Comarca de Kuna Yala because they are inhabited by an indigenous group of people called the Kuna Yala. The Kuna community has very strong traditions and works hard to maintain them. There are a few hotels on the islands, but “hotel” is a pretty general description. We stayed in the second story of a thatched building that had about four other guest rooms in it. Across the sidewalk there were a few more rooms available that happened to be empty while we were there. This was great because the small number of guests really let us feel less like we were imposing and more like we were being included in Kuna culture.

We spent three days on the islands and loved it! Here are just a few of the many pictures we took: 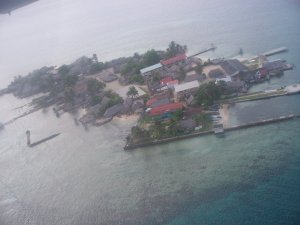 One of the islands from the air.

There are over 350 islands in the Comarca de Kuna Yala. Only about 40 of them are inhabited though. Each community is run as its own village and several leaders from varying communities are chosen to represent the Kuna Yala with the government of Panama.

The island we stayed on is called Wichupwala and is only about a 5 minute boat ride from the island that has the airport on it. 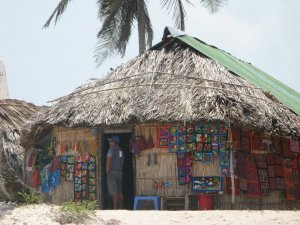 The house has molas hanging all over it on display for visitors to buy. Kuna women sew molas for tourism and also for their own use as clothing. Each mola is several different layers of fabric with tiny designs and stitching to hold them together.

The man in the doorway is employed by the hotel we stayed at as a guide. Each day he took us to a different island to go snorkeling and lay on the beach. Isla del Perro was where we went the first day.

Alex taking a stroll around the island.
Every island we went to was very small. We could walk completely around this one in less than 10 minutes.

These boys were very enthusiastic about their dominoes. They played almost every night we were on the islands!
Other popular activities were soccer and volleyball. Each different island has a volleyball team and they play each other in tournaments. We were very impressed at how good they are!

Isla Coco Solo….can you figure out why it’s called that!? 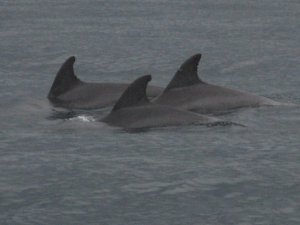 We saw dolphins on our way back to Wichupwala!

This storm was crazy! All the kids on the island were super excited to play in the rain…some of them even took the opportunity to get out the shampoo and wash their hair!

The community has a system of piping from the roofs of the buildings into large storage tanks. The rainwater that gets collected is used for bathing.

This man is repairing a boat. He showed us how he is recarving the bottom to give it a better shape in the water.

One of the other travelers we were with caught a crab while snorkeling. The family on the island boiled it up for us and we shared it for dessert after lunch.

On another island with Isla del Perro in the background.

During our afternoon on this island, the family that lived there was smoking fish and cooking plantains. Alex gave our camera to one of the local boys and he took a fews pictures for us….I have included the one of the food, but not the one of him and his brother goofing around…

We bought this blue mola. She is holding it up to approximately where it would be worn traditionally. The molas are used as a decoration around the stomach area over a regular shirt. The women also often have beaded ankle decorations that go most of the way up their shins. I’m sorry that I cut her feet out of the picture and you can’t see them!