This New Years we decided to go to Utila to enjoy a little beach time with David and Sara since they were visiting. David and I decided to go on a few dives but unfortunately nobody was diving on the 1st so we decided to try to cram 5 dives into the 31st. ON the first boat we were on the Dive Master suggested to cancel the second dive and search for the whale shark that had been sighted. We were instructed to sit on the floor and to slide in as quietly as possible with our snorkel and fins on when the driver told us to. We arrived at the sight and the driver started yelling to go and we all slid in as quickly as possible in paratrooper form. David and I were the first two in and got a chance to see the whale shark. It was a medium sized one we were told and measured roughly 26ft in length. After the first sighting we got back in the boat and followed the shark and repeated the process twice more. We both got a chance to take pictures and to see the whale shark and tried to swim with it as long as I could. Good thing I got a knife for Christmas I thought about trying to hunt it but David suggested against it since we didn’t have anywhere to cook the meat.

First look at the whale shark 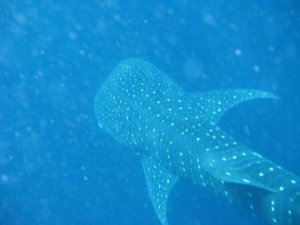 Side view of the whale shark (taken by holding our breath) 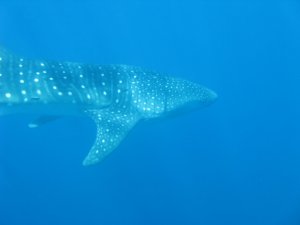 Full view of the Whale Shark

View of the Whale shark from behind as it was leaving.

Yet another awesome picture of the whale shark! 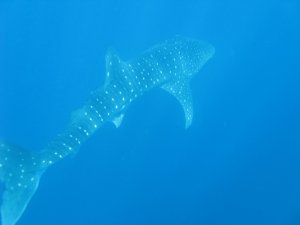