As promised more pictures of Roatan. These pictures were taken while diving. We got lucky and saw a turtle at the very end of the dive and I managed to get an ok picture of it. The camera was a ton of fun to play with as we were diving but there is a serious learning curve to it. At first it is difficult to gauge how close you must be and it is difficult to hold oneself steady to avoid a blur or to avoid missing the fish entirely. Jesse and I also took advantage of the camera and took a picture of each other. On a technical note of diving, this was a drift dive where the current did all the work and pushed us along the reef giving us a chance to use very little energy and see a large span of the reef. 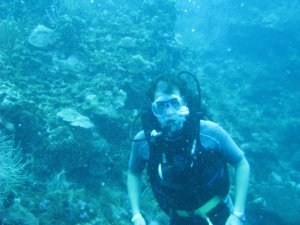 Picture of a Hawk Bill Turtle eating something