We decided to take advantage of a Sunday that promised a little bit of sunlight and an opportunity to explore Moscow. We have been trying to explore Moscow as much as possible. Recently we’ve had a lot of other commitments but have managed to wander a bit the past two weeks.

We headed to Gorky Park and Caitlin was a good sport about my desire to go see a bunch of old Communist statues that had been taken from their original locations and put outside the museum by Gorky Park. They have made it into a Statue garden, and it consists of some modern art along with some old Soviet stuff. As you can imagine I thought it was really cool and Caitlin didn’t seem to mind it too much. The only thing I hadn’t factored in was enough layers to walk around the city for a couple of hours. So by the end I was getting cold and a tad cranky, Caitlin however seems to really like the cold, I never would have guessed it. Thankfully we stopped for a late lunch and a little warmth.

The view from the bridge by our house. We haven’t been getting much sun but when we do we try to take advantage of it

Statues at Gorky Park. They have a lot of the Communist Era statues moved to one park along with some modern stuff. 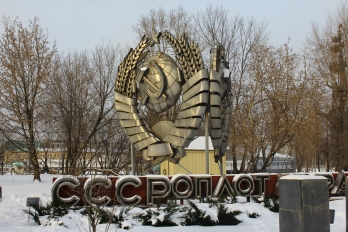 Too cool not to post a picture of it. Made me think of Andy Jones.

A field of Lenin.

Caitlin putting her mitten on the little statue. She thought it was hilarious, and laughed just as hard when I showed her the picture.

It was snowing much of today.

Old friends strolling through the park. Regardless of snow and cold temperatures.

Peter the Great and a partially frozen Moscow river.
Advertisement

One thought on “Around Moscow”