June 19, 2012June 5, 2014 • Caitlin
We arrived in New Delhi at about 2am so we were exhausted to say the least the following morning. But like any good vacation we figured we only had a day in Delhi so we were going to try to see the most we could. Our original plan had been to use the subway and rickshaws to get around the city but after realizing how hot it was and how grumpy we were going to be with each other as we got lost and how it only cost 22 dollars to rent a driver for the day with AC we figured might as well go that route. What we hadn’t realized was that our driver was going to run us ragged as he showed us all the sites in Delhi. While that might be a bit of an exaggeration we definitely hit the big ones. Rather than wear myself out again making a monster blogpost, I’m going to break it into two parts so I can relax in between as it is summer vacation after all.
The first temple we visited, the Laxmi Narayon Temple.

One of the statues outside, we weren’t allowed to take pictures inside.

The front of the temple, we hadn’t realized we were going to have to take our shoes off. The floor in the temple was made of all white marble, it made a lot of sense as we were walking around in bare feet.

The presidential palace. I stuck the camera between the railings and none of the guards said anything.

Flowers in front of one of the surrounding government buildings.

Caitlin in front of another government building. There were two like this that faced each other. 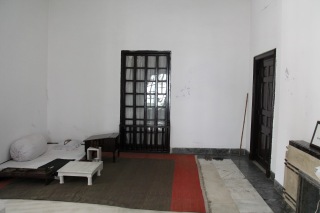 Footsteps showing the final walk Gandhi made to prayer prior to being assassinated.

Gandhi’s house and the path he walked. This was the first site I’ve been to where they literally showed you the last steps of a famous individual.

One of the many quotes of Gandhi that were posted around his house, that has been turned into a museum.

The location of Gandhi’s assassination. This was one of the more interesting sites we visited the first day for its historical importance.