May 13, 2012June 5, 2014 • Caitlin
After checking into our hotel the first night and doing a little sight seeing which wasn’t very successful the first day due to the low clouds we thought we would relax back at the hotel after getting into some dry clothes. As we got our things out of the car we noticed some yelling and cheering coming from a nearby tarp. We asked a couple of the Jeepney drivers what was going on and were informed that it was the Sunday Cock Fights.  We (Daniel and I) figured we might as well go take a look. I’ve never been to a cock fight and I thought why not try it out in the Philippines where it is legal.
We walked in were the only tourists, apparently this isn’t on the tourist circuit. We watched for a little bit and Daniel explained to me that they put metal blades on the heels of the roosters to inflict more damage. He went on to explain that they trained them daily to jump high and to attack with more force. After a fight or two I wanted to take some pictures but was unsure if that was acceptable or not. I figured the best way to find out was to ask one of the guys taking bets on the fights. So I first asked what the minimum bet was and was told there was no minimum. So I first placed a bet of about 4 dollars and was laughed at. Apparently people were betting much hirer than that as I witnessed the guy next to me puling out about $100. I figured this might allow me to to take some pictures. So I then followed it up with a “Can I take pictures?” the guy taking bets said no problem and even said I could get into the ring. I decided to skip getting into the ring since I saw people scurry out of the way during the first fight, instead I opted to just stand on some of the stands and take some pictures. Wouldn’t you know it, the cock I chose won the fight. So I continued to bet my $4 bets on another couple of cocks and won every bet I made. By the end the same guys taking my bets were still laughing but now because of the sheer dumb luck that was my betting.
While I walked away a little bit richer and can now say I have been to a cock fight I don’t know if I’ll go to another one. It wasn’t overly exciting and it was fairly brutal. Even when a cock one there were a few that were disemboweled and were not likely to make it. It was interesting to see the care with which the handlers took with their animals, not one common with most farm animals.
Getting the cocks riled up. 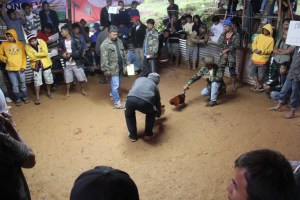 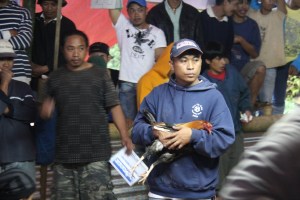 The two cocks going at it. I wasn’t allowed to use a flash, made it hard to get good action shots. 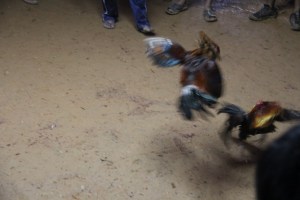 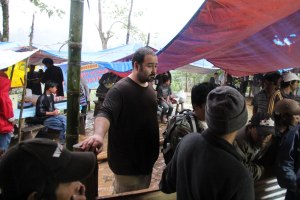 The aftermath of one of the fights. 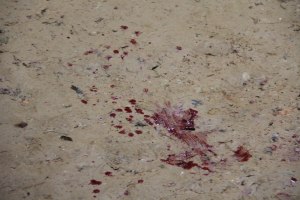 One of the contenders waiting. 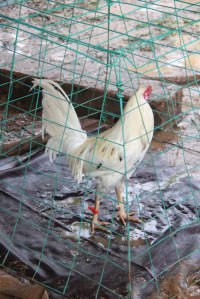 2 thoughts on “Cock Fight in the Philippines”