February 4, 2012June 5, 2014 • Caitlin
Periodically when we travel a couple things happen: One, I get over ambitious and two, something out of our control goes wrong. This past trip to Japan these two things came together in one single event. I had heard about Himeji Castle through one of my video games and thought it looked cool, I fact checked this on google. The only problem was it was pretty far from Kyoto so we thought it probably wasn’t worth visiting on this trip. Then luck struck, Caitlin suggested we go to break up looking at temples in Kyoto, we knew it was going to be a bit of a hike but thought what the heck we’ll do it. We headed to the train station and bought two tickets (not on the bullet train because dang those tickets are expensive) and headed off. We expected it to take an hour and a half like it said it would in the train station. I hadn’t really planned out how to get to the castle besides getting on the train, since getting to Asia I have realized that I have the habit of not planning the small stuff because for the past 4 years I could ask someone along the way, now that I can’t speak the language I am realizing this might not be the best way to travel. So after the train had taken an hour and a half, the supposed length the trip was supposed to take I got a little nervous. I looked on the map and there were two locations with Himeji in the name and neither one seemed to be close. I started to get nervous and realized I hadn’t even brought a map of the area we were heading to. Around this time I saw an old white wall on a hill and told Caitlin that I thought that we should get out at the upcoming station. Caitlin didn’t like this idea as it was not what he had planned and told me she would not be jumping off the train willy nilly. So we stayed on the train for another hour and then arrived at the station called Himeji. I couldn’t see the castle but I asked a policeman who told me to head out of the station and go straight. So we did just that, we even managed to jump on a bus as the sign said to Himeji Castle. When we arrived at the Castle gate there was a foreboding sky as it looked like it was going to let loose any moment, this actually made for a nice back drop as the castle is all white. So I got my camera all ready to take some really cool pictures of a warehouse! The castle is under renovation until 2015 and in order to fix it they built a warehouse around the thing. We figured we would still buy tickets to head in and see what we could which turned out to be not a whole lot. And to top it off we had to pay extra to go into the warehouse to see the castle they were fixing. I couldn’t believe no where along the way someone didn’t tell us. So while while the trip was a bit of a failure Caitlin and I managed to laugh about it and make a bunch of jokes about looking at a drawing of the castle on a warehouse wall (I thought New Jersey could increase tourism if they started drawing UNESCO sites on their warehouses). It was one of those moments were you just have to laugh about it or you’ll get too upset. So here are the pictures of Himeji Castle.
What its supposed to look like.(Taken from the Internet)

What it looked like for us. Notice the fine drawing on the exterior. 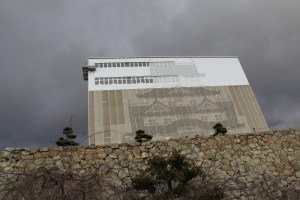 Oooohhh. Look at that galvanized steel. 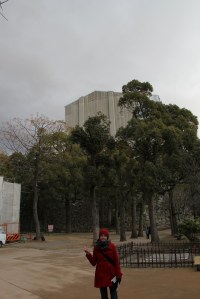 Caitlin using my big head to block out the warehouse.

Samurai suits of armor on display. This was actually cool. 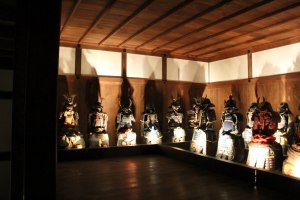 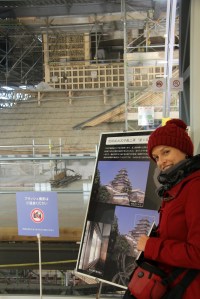