August 21, 2011June 5, 2014 • Caitlin
We have set a goal for ourselves to go explore some new thing in Seoul each Saturday. Grad school starts on Wednesday and in I am a bit worried that I will find myself cooped up at home doing work if we don’t make a concerted effort to get out of the house and see Korea. Teaching abroad is fabulous because it creates so many amazing travel opportunities, but just like in the States, it’s easy to put off activities when life gets in the way. Hopefully our Saturday tradition will continue beyond this week!
We hopped on the subway on Saturday morning and headed to Namsangol Hanok Village. A hanok is a traditional Korean home and in this particular location in Seoul, five different yangban (ruling class) homes from the Joseon era have been moved to one location so that people can wander through and see them. The village was kind of like the Korean version of Old World Wisconsin. We could view the houses, but there were also tradesman demonstrating traditional crafts, a variety of traditional games to try out and even a section where you could paint fans or masks.
In the main plaza when we first entered the complex, this man was weaving shoes. 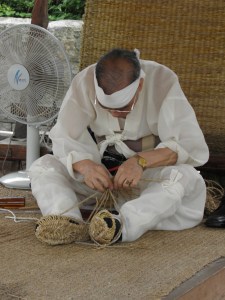 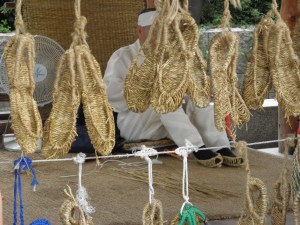 The houses are from the same era as the Geongbokgung Palace so a lot of the architecture looks similar.

This device is used for grinding rice. Every time Alex took his weight off of the wood, the other end of the lever would drop into a hole and grind some imaginary rice. 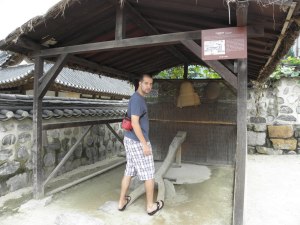 Some of the houses had traditional furniture in them while others also included bedding/clothing and models or even real people.

So far, one of my favorite things about the architecture from the Joseon era is the woodwork and detail. It reminds me a lot of the Arts and Crafts Architecture Movement which I really love.

The larger homes at the village were built in a U-shape with a courtyard area. 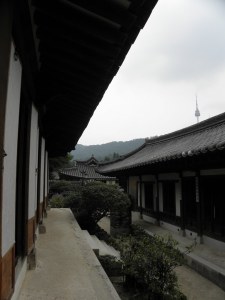 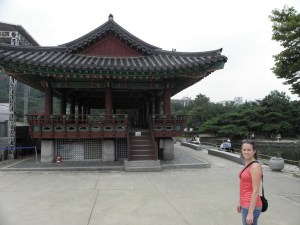 This contraption was used for carrying heavy things. In fact, the kids using the smaller demonstration version were using it as a piggy back device with one kid wearing it and the other riding on the back!

It’s hard to pass up a photo-op like this! 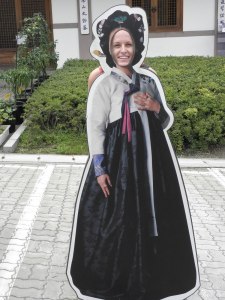