August 20, 2011June 5, 2014 • Caitlin
This past week I just about lost it with our router. When we got here we purchased a cheap router. I figured it would do the trick, even though the directions were in Korean it seemed to be working at first. Until Caitlin informed me that the network name iptime (The brand of the router) had already been an option. But as I could not read the directions and the CD was platformed for a PC I was out of luck. Its consistency as a router was not exactly ideal, thus creating the following routine: Commenting “The internet isn’t working”, hitting the reset button, internet still not working, cursing, unplugging, counting to 30, plugging it back in, it still not working, unselecting my network preferences, searching for a network, cursing, and then finally getting internet for 20min, “The internet isn’t working”, shutting my computer and picking up a lonely planet and planning another trip, thoroughly giving up on the internet for the evening. This happened on more than one evening, all the while Caitlin telling me her internet is fine, I don’t know if this is because her computer is older and better built (Not even thirty and already talking about how back in the day they made computers right) or its too stupid to realize the internet has gone out and dropping the connection later than mine. Caitlin tended to have a smirk on her face during these sessions all the while checking her email, facebook, cooking blogs, whatever she felt necessary. It was starting to wear on me and I mentioned to Caitlin that maybe we should get a new router, she responded half paying attention as she was checking her facebook feed “Nah, you probably just have to finagle it” she apparently was not paying attention to my previous half hour of finagling. The router tried to cut me off however as on Mon. it locked me out of the internet completely somehow sending me to olleh’s (A local cellphone provider) login page and blocking everything else. I had to google translate the message into a word document, transfer it on to a thumb drive, plug it into Caitlin’s computer, google translate it in order to figure it out. This was when I lost it and told Caitlin I was going to an Apple store to buy a router that would function with an Apple.
The previous rant is how we got to the biggest underground mall in Asia. Now I had heard about this place and a coworker who was on the subway when we were headed wished us luck and told us that after 3 years still hasn’t figured that place out. We got there and I realized this was going to be like a rat in a maze. Man was security going to have fun watching us fumble through this one. We looked at a map that was way high tech. as it was touch screen and you could move it around. I moved it around but to no avail as I could not read anything on it and didn’t know how to select tech stores to find the apple store. But we did manage to find the food court on the map as it was labeled in English as well. They must be worried about foreigners get lost and starving to death in this catacombs of a mall. Taking that as a clue we hit the food court first to give us strength, then we dove into the bowels of this underworld creature. We consistently turned left to follow a pattern and by a sheer miracle found the Kodak store where Caitlin could get her passport picture taken, but they said we had to comeback tomorrow to pick it up. We quickly said no thank you, realizing we shouldn’t test our luck of finding the place again. We continued down the hallways as teenage Korean’s flew past us texting on their cells and talking, I honestly don’t know how they don’t run into each other or get lost. About 15 minutes later of slowly trying to figure out which direction to go we found the apple store, I picked up the router which was only slightly more expensive then the states and checked out. We headed out the same way we went in and even managed to stop and order ice cream through pointing and nodding at the cold stone. Always fun to hold up a huge line behind you because you are incapable of saying the English word with the correct Korean accent. All in all it turned out alright and while I think the new router is the best thing we have gotten so far Caitlin still shakes her head every time I mention how awesome I think it is.
Trying to figure out where to go and how to get there. Nobody bothered to stop at these things, so I did not feel awkward posing in front of them. 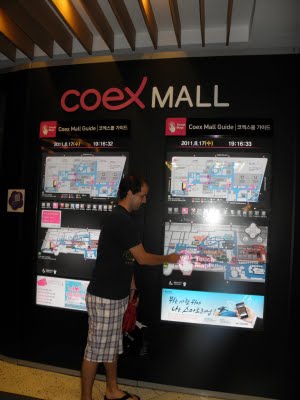