I love snorkeling with just about anything, but sea lions have got to be the most amazing thing I’ve ever swam with! They were super playful and had a great time zipping around in circles, flipping upside down, and swimming straight toward us, ducking down deeper at the last second. It was amazingly hard to photograph, but will also be impossible to forget.

Besides the amazingness of swimming with sea lions, we got to watch a small pod of dolphins play in the waves at the front of our boat as we traveled from island to island one afternoon.

We saw white-tipped, Galapagos, and hammer-head sharks…and all of them under water! To top off the excitement, we also got to see a giant herd of white-tipped sharks hanging out in a shallow river to rest one morning.

And during one of our snorkeling expeditions, I got to watch a school of almost 20 sting rays swim 15 feet underneath me. No picture of that amazing incident, but here are some other rays. 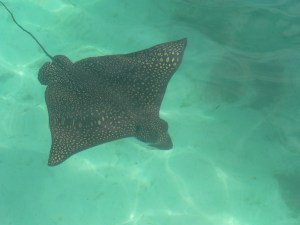 We got really lucky and had the most amazing other passengers and crew on our boat. A big family Christmas became even bigger as we added Simon (from England), Melanie and Scott (from Ohio) and Sharon, Rachel, Sophia and Eliana (from New York) as well as Luis (guide), Juan Carlos (chef), Francisco (assistant chef/amateur singer…check out this video), Daniel (captain), Juan (assistant captain), Daniel (sailor/dingy driver extraordinaire), Tito (waiter/bartender), and Emilio (engineer). 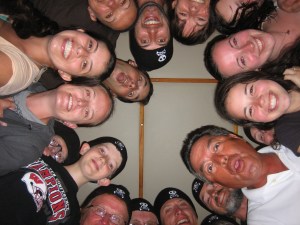 Scott gets credit for this photo! 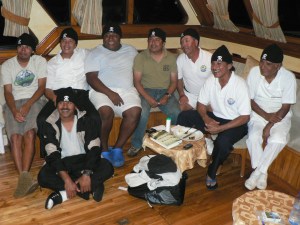 I like lizards. The Galapagos has several types that we saw, but I thought the coolest were the marine iguanas. To start with they are Christmas colors…perfect! And they can swim. 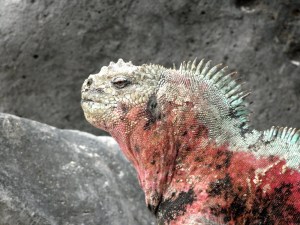 I was really nervous to be on a boat for 8 days due to my affinity for motion sickness. I mean seriously, for a person who can’t have ceiling fans because they make her dizzy, signing up to spend a week on a boat is pretty risky. But the motion sickness patch and some extra dramamine/bonin on the rough nights made for smooth sailing. Boats are fun! And the Estrella del Mar was pretty amazing, with it’s cute little cabins, top sunning deck, quaint dining room, etc. I was really glad I didn’t get sick because I really liked being on the boat. Who woulda thunk?!

Okay, I couldn’t stop at just 5….I’ve never seen penguins in the wild before so that has to go on the list too!