October 7, 2010June 5, 2014 • Caitlin
The last hike on our trip was to Lago 69. Eric, Diana, Wyatt and Amanda headed north on a bus the night before. We had just one more day in Huaraz so we signed up for some transportation to the lake which is supposedly a few hours outside of town. The transportation turned out to be a complete disaster. The driver didn’t know how to get there and he drove like a complete and total psycho (and this is coming from someone who has ridden with a lot of crazy drivers in the last 3 years.
The company on the hike was also not exactly ideal. There was one very nice Australian woman and then a huge group of Israeli guys on leave after finishing their army service. They were very nice, but lacked a little nature sense…meaning they had no idea it was tacky to hike with their boombox blaring. We stayed a ways behind on the trail so as to enjoy the peace and quiet rather than the crappy 80s music they were listening too.
The lake itself was very pretty though. We had been pretty spoiled during our 4 day hike so the fact that a few clouds blocked the view of the top of the mountain was disappointing, but even without the tip of the peak, the water was a gorgeous color and the surrounding area was beautiful.
We also just had a good time hanging out with each other after spending the previous six weeks in a whirlwind of visiting family and other traveling friends. We reminisced about the whole trip, our favorite parts, the funniest things, and what we were excited to get home for (mostly to see the cats!)
Here are a few of the pictures we managed to take along the way. As with the previous hike, the Cordillera Blanca is just too pretty to only take a few photos so we have quite a few! 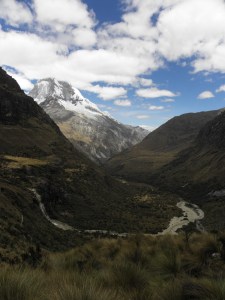 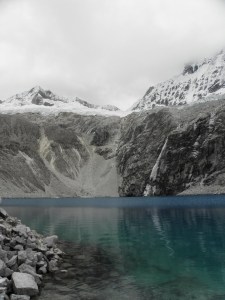 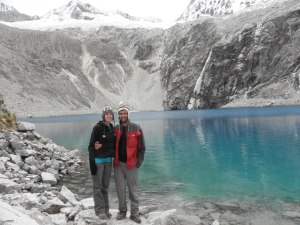 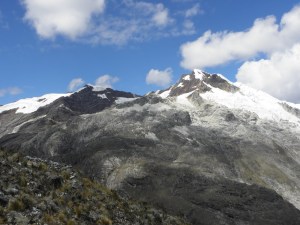 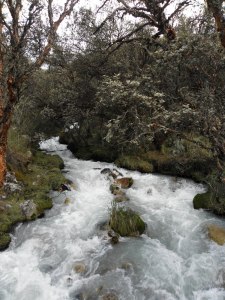 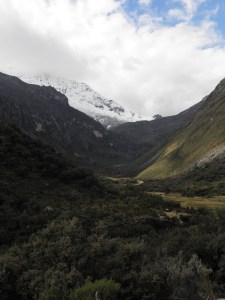