August 29, 2010June 5, 2014 • Caitlin
The next stop on our trip was the Inca trail and Machu Picchu. We were all very excited and nervous at the same time as we hopped on a bus at 5:20am to begin our 4 day journey. After picking up the other 8 members of our group and a whole slew of chaskis (porters), we headed to Ollaytatambo to spend the next several days retracing the steps of the Incas.
Here we are getting our gear on at the very start of the trail. 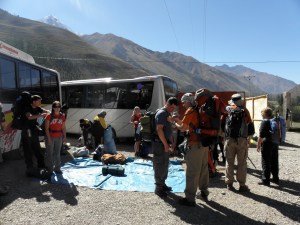 The train to Aguas Calientes (the small town right next to Machu Picchu) runs along this river through the valley. For every day trips, the Incas would walk this way along the river, but for special occasions, they would go up and over the mountains. There were several times along the trail that I kind of wished we were taking the easy valley walk! 😉

We showed our passports at the entrance to the trail, crossed that little bridge and were on our way! 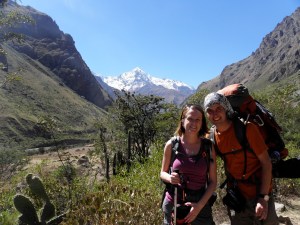 Day 1 of hiking was the easiest. It was both the shortest and the “flattest.” Flat is a relative term in Peru though and a common term among the guides is actually “Inca flat” meaning only a little bit up instead of a lot.
Along the way on the first day we came across these ruins on the edge of the river. 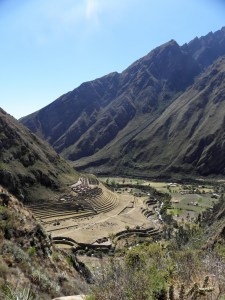 We got some amazing views of the moon throughout the nights on our hike since it was nearly full! 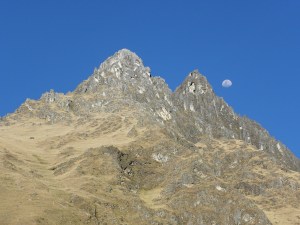 Our first campsite was near a small indigenous village and the locals took the opportunity to challenge the tourists to a game of soccer. Somehow Alex managed to do this in his hiking boots! I can’t imagine a better backdrop for any sporting event. 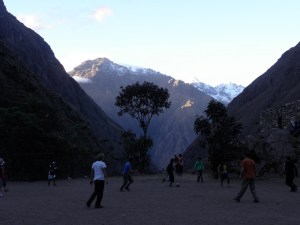 The second day was described to us as the hardest…nearly all up hill with the highest point at Dead Woman’s Pass (4200m). We had psyched ourselves up for this to be incredibly painful and while it wasn’t easy, it didn’t seem that bad in the end.
Along the way we saw this tiny alpine deer.

The biggest trick on day 2 was remembering to drink enough water…easier said than done when you’re gasping for air. I took full advantage of my less acclimated family members and took lots of breaks to stop and wait for them so that I could remind them to drink water.

Our group at Dead Woman’s Pass. We were all thrilled to make it up all that “up” and the view from the pass was definitely worth the effort.

For some reason jumping shots caught on at the pass so we all took some. 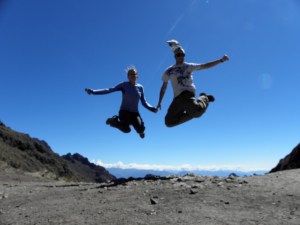 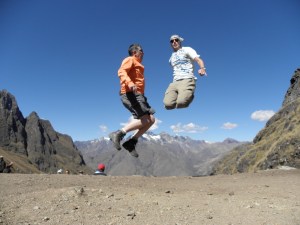 Then we got to start heading down. Just a few more hours of hiking (and knee wobbling) until our campsite. 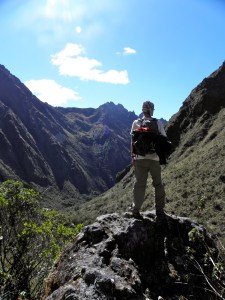 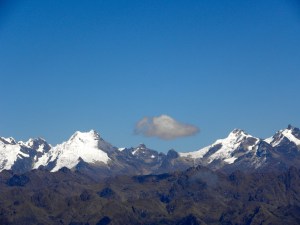 The end of day 2 is when things started to get a little rocky. Danielle had a migraine, Dad’s knees were killing him and Amanda wasn’t feeling too well so we all laid down in our tents to rest before dinner when I heard David lean out of his tent and throw up. David had altitude sickness here in Quito so I thought maybe he was struggling with the altitude again and that he would start to feel better soon. He went to bed early while the rest of us had dinner and then headed to bed ourselves. In the morning things got much worse. Mom and I and two members of our group from New Zealand were all puking our guts out alongside David and to add to the pleasure of losing our dinners out one direction, we were losing them out the other direction too.
Day 3 is theoretically less hard than day 2 because it isn’t so much “up” and is lower altitude, but it is also much longer…15 km and nearly 10 hours of hiking including some 3000 stairs down.
With nearly 1/3 of our group incredibly sick, it was not going to be a fun day. It is a good thing Jesus took over the camera because I spent all 10 hours of hiking staring at my feet and thinking about how bad my stomach hurt. It’s nice to be able to look back at the photos and see what I was walking past…like these ruins along the trail.

At lunch, all the sickies passed out in the sun…maybe not the best idea for our already dehydrated selves, but amazingly the cook for our group procured jello…the only food I managed to keep down between the night of day 2 and the morning of day 4.

There were more ruins after lunch. 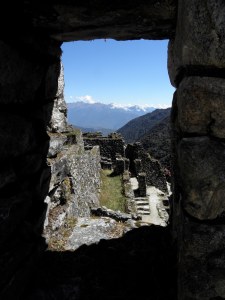 And some neat tunnels where the trail went through a big rock.
Notice I am carrying nothing except hiking poles. Alex managed to carry both his big pack and my day pack since the effort of simply walking was nearly too much and I was in no condition to also be lugging weight on my back.

There were beautiful snow-capped mountains visible during every day of hiking.

And we got to see some incredible Inca terracing. 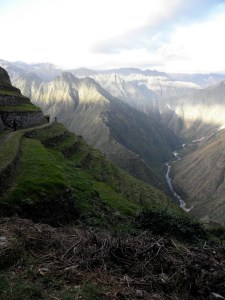 While everyone else was enjoying the Inca ruins this is what I was doing. 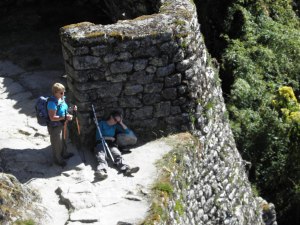 The Incas sure did love their stairs. Day 3 ended with nearly 3000 of them. I was exhausted and weak, having eaten nothing but jello in almost 24 hours (and expelling almost everything from my body in that time) so it was quite the task to wobble down each of those steps.
The weirdest thing about Incan stairs is that they are huge! The Incas were short people, I can’t figure out why on earth they would create such giant stairs.

I was thrilled to get to the campsite on day 3…mostly because I spent the whole day wondering how on earth I was going to get there. Most of our group celebrated and took showers, but I (and my mom and the New Zealanders) crawled into my sleeping bag and passed out for the night.

The final day of the hike was an early one…we got up at 3:30 so that we could be packed up and in line for the sun gate by 4:30. The park opened at 5:30 and we had about 1.5 hours of hiking to get to the sun gate and our first view of Machu Picchu….which I will put in the next post since this one is already waaaay too long!

One thought on “El Camino Inca”