August 19, 2010June 5, 2014 • Caitlin
Sucre is a pretty colonial town (although I wouldn’t go quite as far as agreeing with Lonely Planet’s decree that it is reminiscent of Florence). With a nice plaza and several acceptable restaurants, we took a chance to relax for a bit, mostly eating and doing laundry. One of the main attractions listed in the guidebook for Sucre is the dinosaur park where apparently real dino footprints were discovered. The idea of seeing a dinosaur footprint up close, taking our picture with it and even potentially putting our own foot in it for size comparison were too much to pass up. We excitedly hopped in a cab and headed out to witness the giant imprints…and that was probably the most exciting part of our trip to the dino park.
Upon arrival we found out that the dino park is not cheap! I don’t remember exactly how much it cost, but I remember being taken aback. I mean, Bolivia in general is a very inexpensive country so why on earth would this dino park (in the middle of a cement excavation site no less) be so expensive? And, to top it off, they charge extra if you want to be able to take photos. We went for it anyway, hoping for the best.
As we entered the park we found many big fake dinosaur sculptures and a lookout toward the cement excavation site near the cliff across a giant hole next to the park. Everyone was lined up looking across this hole so we lined up too…and couldn’t figure out what on earth everyone was looking at! Finally, we realized that some marks on the wall are the dino prints…just that they are so far away you can barely see them and they look tiny from so far away. To top off the weirdness of this set-up, several large trucks were busy excavating cement material from the bottom of the cliff where the dino prints were.
Thinking this must be explained in the “museum” portion of the park we headed indoors only to find a fake dino skeleton on display and the most general explanation of the history of dinosaurs ever…nothing specific about the site or the prints at all. 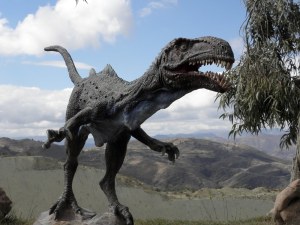 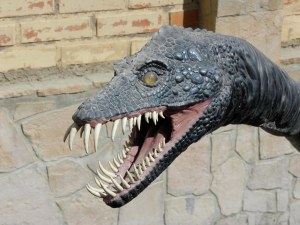 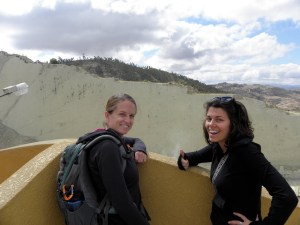 Amanda and I in front of the wall of dino prints. 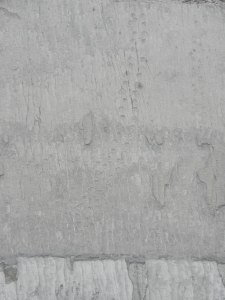 Look carefully….do you see them!?
Mind-boggled and a bit perplexed, the situation was too funny so we took some pictures of the dino statues, zoomed in on the wall for the full effect of the prints, and got in a cab to head back to the Sucre we had come to like so far…the one that revolved around food and clean laundry instead of obscure marks in a construction site that cost a bunch of money to look at from really far away.