May 24, 2010June 5, 2014 • Caitlin
When we first decided we were moving to Ecuador, Alex started dreaming about having a dog, a tent and a jeep. We have a tent that we love, but luckily we also have friends who have a dog and a jeep. Living vicariously through them is much less money and work than actually owning our own dog and jeep!
This past weekend a group of us headed out in the jeep to Laguna Quilotoa, a crater lake roughly 3 hours south of Quito. We left the dog at home since 6 of us in the jeep was packed enough (not to mention he gets a bit carsick). This turned out to be a wise decision on the curvy roads with four of us crammed in the backseat and the back of the jeep packed to the ceiling.

The views on the way to Quilotoa were incredible!

Do you see Cotopaxi (covered in snow) amongst the clouds? 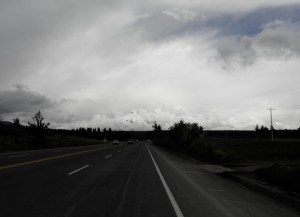 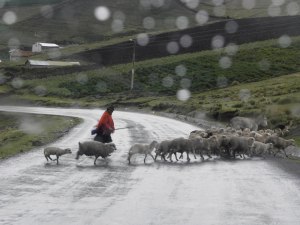 And then we must have hit one bump too many…

The car turned off and would only continue to run if the key was turned all the way…as in start the car and then don’t let go of the key or it will turn off!
Several passersby stopped to help and Eric and Diana headed back to the closest town to get a “mechanic.” He proceeded to take apart the entire contents of the hood and at one point was literally inside the car (one foot on something with his head directly next to the motor as his friend tried to start the car).
In the meantime, we tried to wait patiently… 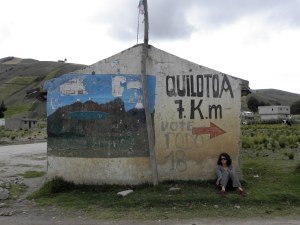 After nearly two hours, the “mechanic” determined that it was the switch (something we had told him when he started taking the car apart) and told us he didn’t have the part (which we could have figured by the fact that he had done most of his tinkering for the past two hours with a hammer and a rag). Instead he used string to tie the key in the on position and showed us how to attach two wires under the hood to get the motor started. So basically, we all learned how to hotwire a car.
Back in “working” condition, we made it those last 7km to Quilotoa and decided to stay in a hostel, rather than camp for the night.
Because I’m going to save Laguna Quilotoa and the hike around it for another post, I will just leave you with some pictures of our drive back to Quito on Sunday.
It was just as beautiful, if not a bit more nerve-wracking as we kept our fingers crossed that the car would make it all the way back. Eric quickly became a pro at braking with his foot on the gas (he couldn’t take it off or the car would turn off) as well as sustaining the electric shock that got him every time he had to reconnect the wires under the hood. We only had one minor snafu when we needed to stop for gas. The jeep requires the ignition key to open the gas tank and the key was tied to the car! Instead, Diana figured out how to jimmy the gas tank open with Alex’s swiss army knife…phew. Then we had to push the car away from the pumps before connecting the wires again so that we wouldn’t blow the whole place up. The last part of the adventure happened when it started raining at the end of the trip. Turns out one of the many things the “mechanic” fidgeted with on Saturday was the wire that connects the windshield wipers. Luckily we only had a few more blocks to go and made it home before we really needed them!
Cotopaxi 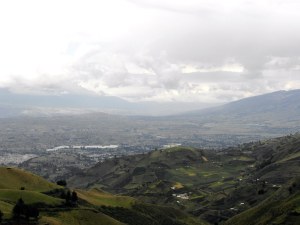 Illinizas Norte y Sur…Alex and my brother climbed Norte when he was here visiting. 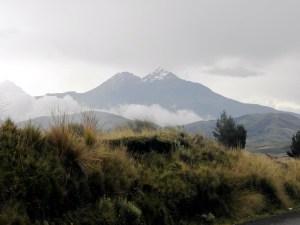 One thought on “Adventures in Ecuador”