April 18, 2010June 5, 2014 • Caitlin
Alex has always wanted to stay at an old authentic hacienda so this year for his birthday, rather than a gift he requested that we splurge on a weekend away. We have also been reading a lot of travel magazines lately and one featured an hacienda near Cotopaxi National Park. I looked into it, choked when I saw the price, told Alex we couldn’t go and started looking into more affordable haciendas…but I kept getting drawn back in by San Agustin de Callo.
There are several nice options for haciendas in Ecuador, but San Agustin de Callo is the only one that is built on the site of an Incan palace. When the Incas conquered the Indigenous tribes of Ecuador, the king put his son, Atahualpa, in charge of this region. His home was where San Agustin de Callo now stands. After the Spanish invaded and the Incas abandoned the palace, Augustinian monks took over the area and built a monastery on the site. Most of the hacienda that is present today was originally built by the monks. In 1921 the hacienda and its surrounding lands were purchased by a former Ecuadorian president. It has since been passed down in the family and is currently owned by the granddaughter of General Leonidas Plaza Gutierrez.
This historical information made it hard to pass up the opportunity to stay at San Agustin de Callo. We could save some money by choosing a different hacienda, but would the experience be the same without the historical perspective?
We decided to take the leap and go for the expensive option, keeping our fingers crossed that we would feel it was worth it. It was incredibly nerve-wracking and we were nervous on our journey there. Once we got out of the car and wandered into the courtyard of the hacienda, we started to feel more comfortable with our decision. After they showed us our room, upgraded to a suite, we felt even better. Once we wandered the grounds and petted some llamas, we felt downright excited. I took nearly 400 photos in roughly 24 hours so I will tell the rest of the story in pictures…
Turns out a rainy weekend in April isn’t high season for haciendas here in Ecuador…in fact we were the only guests in the entire place. This meant we got fabulous service and we got upgraded to a suite. Our room had a living room, a bedroom and a huuuuge bathroom…and every single one of these rooms had a fireplace in it.
The living room already had a fire burning in it when we arrived and as we got settled in, one of the waitstaff brought us warm canelazo (an apple cidery drink that is typical in Ecuador).

The view looking out into the courtyard from the living room.

The bedroom.
Alex was very excited that we were provided with panchos to wear as it was quite cold in the evening. 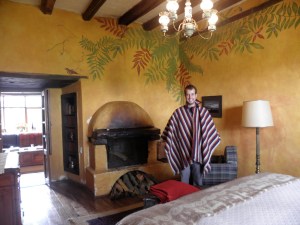 The view out the window above the bed. 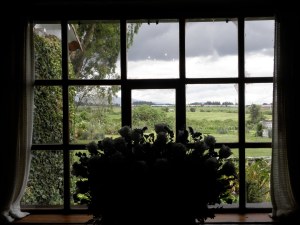 The bathroom was larger than my childhood bedroom…and every bedroom I ever had in college.

It was also beautifully painted, had a giant bathtub, and was adorned with pretty chandeliers.

After we were settled in our room, we headed out to explore the rest of the hacienda. Adjacent to our room was a family room for the use of all guests (meaning us!), again with a fireplace. The hacienda has quite the collection of coffee table books about Ecuador, like hundreds of them, so we enjoyed a cup of tea with hors’dourves while perusing them later in the evening. 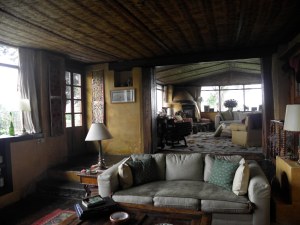 There are several rooms in the hacienda that still have the authentic Incan walls, the living room being one of them. Here I am in front of it! 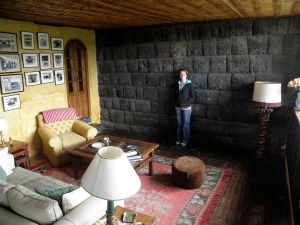 Outside of our room, checking out the courtyard. Since no one else was staying at the hacienda this weekend we were able to peer into all the windows and check out the other rooms. They all looked beautiful and apparently some of them even have the Incan walls in them. 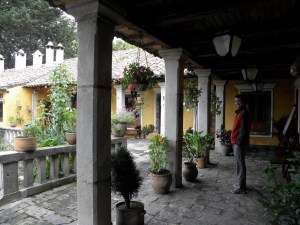 Cotopaxi from the lawn of the hacienda. The entire weekend was chilly and rainy off and on, but we still got several pretty good views of the volcano. 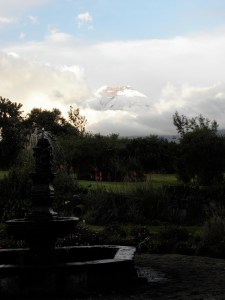 Looking out of the hacienda’s gate toward the road. The land beyond the gate actually still belongs to the hacienda. In fact they use a lot of it for gardening and much of the food served is made with ingredients grown in the garden.

Look what we ran into during our wanderings! The hacienda has a bunch of llamas that live on site. They were very curious and came up to see what we were gawking at. 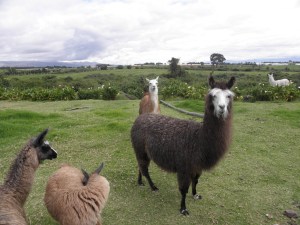 Up close and personal

After wandering around for a bit, we indulged ourselves with a nap and then leisurely sat in front of the fireplace in the living room.
One of the price justifications we gave ourselves was that a really good dinner out could cost a lot anyway and with the cost of our room at the hacienda we were getting dinner, breakfast and lunch! This may have been a bit of a stretch in terms of convincing ourselves the cost was okay, but the food definitely did not disappoint.
Hors’dourves in the living room.

Dinner is served in a room that was originally a ceremonial room for the Incas. It had the traditional stone walls, but they also had recessed areas where the Incas put the skulls of their ancestors draped in gold jewelry. Luckily for our appetites, these areas merely had candles during dinner. 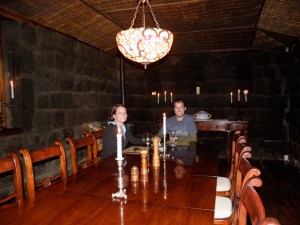 Although we were the only two people at dinner, we still had a choice of dishes. We both started with a potato and rice soup, followed by a main dish. I opted for the lomo (steak).

Then came the dessert menu which had over ten choices plus one called potpourri which was a small taste of everything. Since we were already stuffed we stayed away from that and opted for individual choices instead. I got chocolate mousse and Alex chose a traditional Ecuadorian dish of glazed figs with cheese. 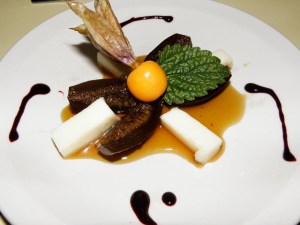 When we got back to our room after dinner we found that all the fireplaces had been lit and the bed had been turned down for us. We each had a small cookie, a note telling us to have sweet dreams, and a hot water bottle warming our spot!

We both put on our panchos and cuddled up by the fire for the evening.

This morning we started our day off by enjoying the beautiful weather in the courtyard of the hacienda.

Then we headed into the breakfast room where we were greeted with a huge array of food. We started with fruit salad, granola, and homemade yogurt.

Followed by bread with a variety of toppings. Clockwise from the top: strawberry jelly, the cream skimmed off the top of milk, honey, papaya jelly, butter, raspberry jelly, blackberry jelly. 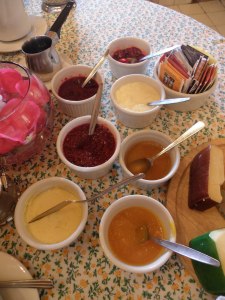 And plenty of cheeses…the only one I can name though is the brie in the middle.

After all of that we got to choose from this ridiculously long egg menu. Alex went for benedictine while I got an omelet.

After breakfast we took a tour of the hacienda with one of the employees who was able to explain what we had wandered through the day before. She gave us a lot of the history behind the hacienda and showed us some of the areas where the Incan walls are in the best condition (and where the Spanish attempted to replicate the style miserably).
This room is the other complete Incan room (the first being the dining room) and was also used for ceremonies. In more recent times it has been turned into a chapel. 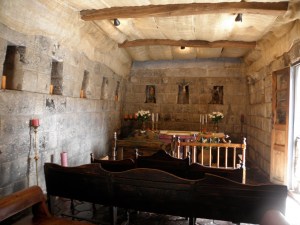 The tour ended with us getting to feed the resident llamas. They came right into the courtyard of the hacienda and we fed them carrots! 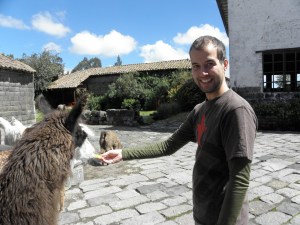 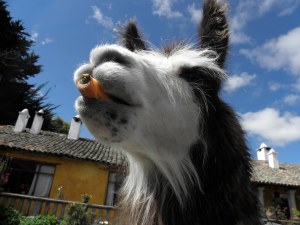 It was pretty entertaining to see them so close to the hacienda itself rather than out in the field and they were very well trained since when we applauded them they all turned and ran back to their field together. 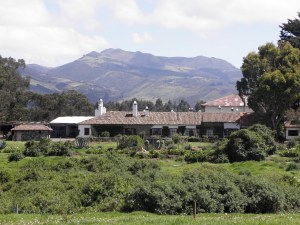 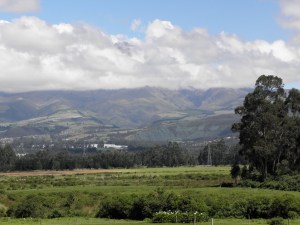 before having lunch and heading home…trout for me 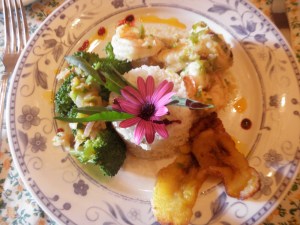 All in all, it was an incredible weekend and an amazing experience…exactly what I was hoping to give Alex for his 28th birthday.