April 5, 2010June 5, 2014 • Caitlin
As diving posts fall into my responsibility, I felt that I should get on the ball before I fall behind and forget to posting this. This past week was Semana Santa and as many of you know we went to Colombia. While in Colombia we spent most of our time in Taganga a beach town on the Caribbean. From here we went to Parque Tayrona to spend a day of diving and sun. The first dive back from the hiatus I was a little rusty and it showed from some rookie mistakes. It didn’t help that we were doing a cave dive, with the entrance being 27 meters. The cave itself was alright, not a whole lot of fish but there was an air pocket that allowed us to take out our regulator and breath in this little pocket of air. The second dive went better and was a simpler dive. While doing the second dive I felt slightly spoiled and bored as the underwater life was very similar to what I had seen in Honduras. This quickly changed after seeing 2 scorpion fish together followed by some lion fish. While Lion Fish are not what you should hope to see in the Caribbean as they are an introduced species that are causing a lot of destruction, I must say with some guilt that I was excited to see the first ones of my diving career. So I took a bunch of pictures and got even more excited. I dove a again a few days later with Wyatt (one of our teacher friends) who had just finished getting certified. I realized that I hadn’t lost the desire to dive thankfully merely it had gotten slightly dusty from lack of use. I know realize that it is time to branch out and dive in other oceans. Here I come pacific. Hope you enjoy the pictures.
A view from inside the cave. 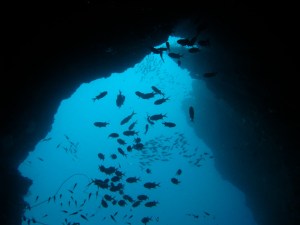 Two Scorpion fish sitting on the sand together. 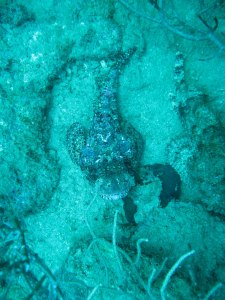 One of the Scorpion fishes up close. Unfortunately I didn’t have the flash on yet? 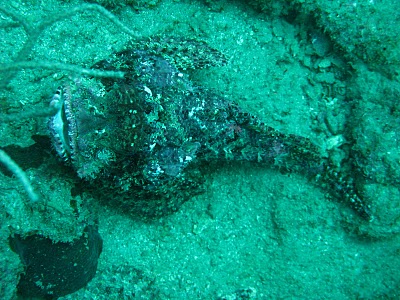 Lionfish. I got the flash working at this point.

One thought on “Diving in Parque Tayrona”