January 3, 2010June 5, 2014 • Caitlin
Chile has some pretty amazing food and since we traveled to such different parts of Chile we got to try several different types. Here are just a few of the things we ate over the last two weeks.
Tuna Ceviche on Easter Island

A close up
Can you pick out the clam, mussels, razor clams, red sea squirt, and abalone?

Chupe de Marisco
Christmas Eve is Jesse’s birthday and he wanted some good seafood which led us to the seafood market in Valparaiso. This dish had all the same weird stuff that Alex’s did only it was creamier and covered with cheese. 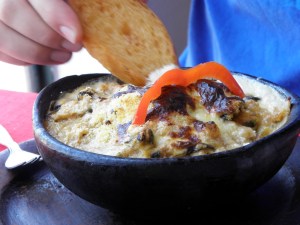 Pisco Sours at the fish market in Valparaiso on Christmas Eve.

Un Completo
Jesse spent the entire first week of our trip talking about how he wanted to eat these hot dogs that are smothered with avocado, mayonnaise, tomato, and sauerkraut.
We ate them in a dive of a restaurant in a semi-seedy part of Valparaiso and were all highly concerned that we would be sick afterwards. Since we had a 14 hour bus ride ahead of us it was lucky that we weren’t.
Also….notice the clown eating at the table behind us….

Una Pachanga
This was supposed to be a snack in Puerto Varas, turns out it’s as big as your head!
Underneath all those fries were several different types of meat. 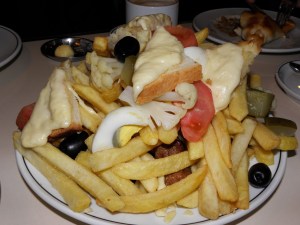 Mote con Huesillos
Alex ordered this concoction while we were sightseeing in Santiago. It is made up of peach nectar, a peach pit, and barley. Kind of strange, yet good at the same time.