This past weekend we had a three day weekend because of Guayaquil Days (The independence of Guayaquil). We decided to go to Banos as it is about a 3 1/2 hr. bus ride from Quito it would be a little far for a regular weekend but not unreasonable for a long weekend. One of the activities that was suggested to us by a second year teacher was to go on a bike ride out of town. The bike ride was mostly down hill but had a couple of parts that were up hill, not too strenous but we both ended up with sore butts from uncomfortable bike seats. Overall the bike ride itself was a lot of fun and we even met up with some friends towards the end. In the middle of the bike ride we were also able to do a couple of mini hikes to get a better view of some of the waterfalls along the river. We took a bunch of pictures and some video. So while I should have been grading I decided instead to make a video for your enjoyment. I put more work into this one than the previous so I hope you like it. We have a higher resolution one but it didn’t fit on the blog, so if you want a copy you have to come visit. I also put a couple of pictures that I didn’t fit into the video below.

Caitlin and I at Paílón del Diablo 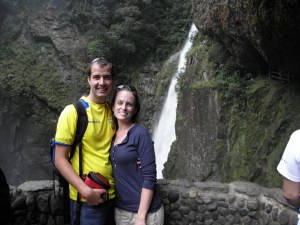 Trying to get a sip of water.

Creeping to the top of the waterfall.

Caitlin and Amanda in the back of the truck on the way back to Baños. 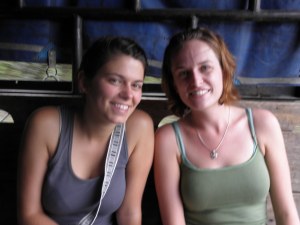