March 22, 2008June 5, 2014 • Caitlin
This spring break we spent it in Roatan with Mom, Matt and Tommy. Getting there took some work and some luck as we were the last ones on the ferry headed to the island. Little did we know, traveling during Semana Santa would be such an ordeal. Between sold out buses, crazy ferry lines, and some serious choppy water, we were glad to finally get to the beach. We spent the week lounging on the beach and snorkeling. The break was not a go, go, go break but it was very relaxing. We showed them a small part of Honduras and had fun doing it.
We also had some time when we got back so we took a hike up the Coca Cola trail in San Pedro Sula. The mountain behind our school has a giant Coca Cola sign on it with a paved trail up to it. The hike was tough but we all made it up and got a good view of the city. 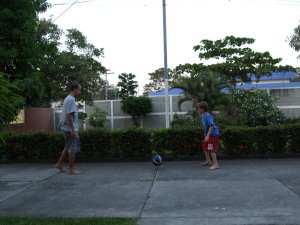 Soccer in the courtyard outside our apartment. 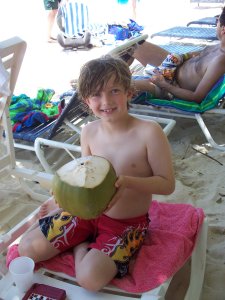 Tommy drinking out of a coconut on the beach in Roatan! 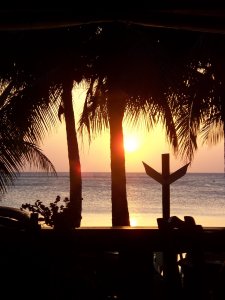 The view from our table at the Argentinian Grill in West End.

Brothers in a hammock. 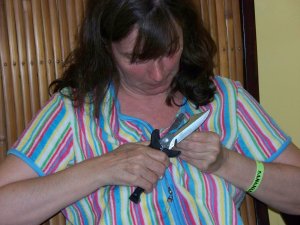 Mom got good use out of my dive knife, cutting some sharp parts off of her shirt.

Waiting for the ferry back to the mainland.

A view of San Pedro Sula from the mountain.

Proof that we made it to the CocaCola sign!