February 26, 2008August 4, 2014 • Caitlin
First of all, you should know that I took over 300 pictures on Sunday….I did my best to pick out only the best ones to post on here, but it was very hard! These are just a small chunk of what we saw, but the next time we see you in person we would love to show you the rest!Antigua has an annual sawdust carpet tradition. Each Semana Santa (the week before Easter), the roads of the town are completely covered with extravagant “rugs” made of sawdust. After the rugs are created, a procession moves from the church through the town, ceremoniously walking on all the rugs. We were aware of this tradition before going to Antigua, but knew we would miss it since Semana Santa is still several weeks away. What we didn’t know is that the surrounding towns have the same tradition on various Sundays during Lent. We heard some rumors and then asked around to find out that Jocotenango, a neighboring town, was having a carpet festival while we were there.

We headed to Jocotenango around 9:30am to see the rugs before they were walked on, which we were told happens at 11am. We ended up being there until almost 3pm! What we pictured as a small carpet festival turned out to be over 30 blocks worth of rugs that made a giant loop around the entire town. And yes, the procession did start at 11am, but it went until 11pm…winding through the whole town, then making it’s way to Antigua and back. Some families were just starting their rugs as we walked by, while others had been working on them since 11pm the night before. Getting there as early as we did allowed us to watch the making of the rugs, see the finished products, and watch part of the procession.

Throughout the day we found out that “sawdust carpets” is not an entirely accurate description. The rugs were made out of all sorts of things: sawdust, flowers, fruit, vegetables, flour, talcum powder, egg shells, giant seed pods, etc….basically whatever people could get their hands on.

Being in Jocotenango for the rug ceremony was an excellent accident that we would gladly repeat again! 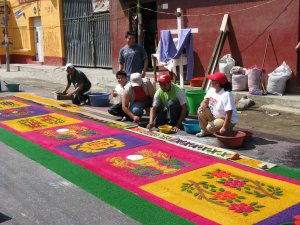 The rugs seem to be a major family affair. There were people of all ages working on them and many of them definitely took a group effort. A man we talked to described how his mother’s restaurant saved egg shells for his design all year long and he explained that he creates a different design each year. 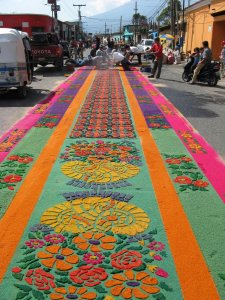 This was one of Alex’s favorites…it is made entirely out of colored sawdust.

This rug is made out of coarse sawdust, the larger pieces gave it a much different look than the ones with fine sawdust. 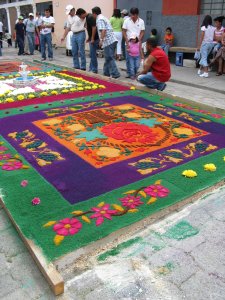 Some of the rugs were extremely thick! We were amazed at how flat this one was across the top after all the layers they added to it.

Some rugs had a layer of leaves or pine needles as their base instead of sawdust. 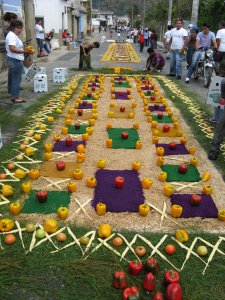 Red and yellow peppers anyone?
The light colored “sticks” are from the inside of a giant pod-like plant. A man explained to us that they are grown in a warmer climate and brought into the Antigua area just for the carpets each year. 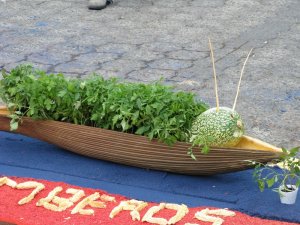 The shell of the giant pod. 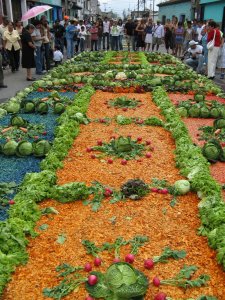 This was one of my favorite rugs. It has a base layer of coarse sawdust, but the rest of the design is vegetables….lettuce, cauliflower, radishes, carrots, cabbage, etc.

Alex needed a piña colada break…and straight from the piña!
The whole day had a festival-type of feeling to it. There were all sorts of families walking the streets to see the carpets, as well as food vendors and people selling toys.

Many of the designs were made using elaborate stencils like this one.

Sifters were used with the very fine sawdust to get s smooth even look.

This little boy is spraying water on the rug. The water keeps the design from blowing away, but also keeps the colors bright under the sun until the procession arrives.

That’s a big bag of flower petals!
By asking around we were able to figure out that some families bought the items they used, while others collected throughout the year. The sawdust itself could be bought in natural color and dyed, or the family could purchase the colors they wanted to use.

Although most of the rugs were rectangular in shape, a handful were set up as diamonds.