We recently went to Copan for a second trip because it was sponsored by the school thus making it very cheap. I was feeling a little under the weather but i decided to cowboy up and go. We decided to take the weekend easy and see a few things we didn’t see on the first trip. We went to the hot springs that are near Copan, which required renting a van and taking a 45 minute ride on a dirt road. On the way up to the hot springs I tried taking some pictures of the scenery but they did not turn out very well I put one of the better ones below. The hot springs felt good since while sunny was a slightly cool day by our new adapted standards. I’m sure it would feel like spring if we had just come from Madison. After the hot springs we walked around the town and did a little shopping. The next day Caitlin entertained my history nut side and we went to the Copan Ruins Museum. It was well worth it, below is a picture of the center of the museum. The picture is of a replica of one of the temples that was built early in the Mayan civilization and then later built over with one of the larger pyramids. The temple replica is based on the original that is apparently intact still below the pyramid. It still has the colored stucco and much of the detail. The plan is to try and go see it on one of our later trips since for an addition fee one can access the tunnels themselves and see parts of the temple. Also below is a replica of a stucco design that was on the ball courts. The picture of Caitlin is her next to one of the original stone carvings. Since most of the originals are inside protected from the weather, the replicas are placed outside int eh place were they were taken from. That completes this trip to Copan but there will be more as it does not cease to entertain. We have also decided to highly recommend it to anyone coming to visit because not only are the ruins awesome but the town itself is a blast.

The Trip up to the Hot Springs 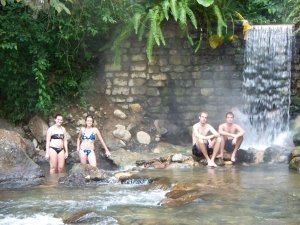 A stucco sculpture that was on the ball court which was recovered and on display.

Caitlin and one of the Gods.