August 19, 2012June 5, 2014 • Caitlin
Not every day in Udaipur was spent relaxing. We managed to get out and see a few things in the process. Our friend Andy(from Korea)  said we had to get out to Kumbhalgar fort. What we hadn’t realized when planning our trip was that we could have rented a driver to take us from Udaipur to Jodhpur and seen the fort in route. But as we had already purchased our flight from Udaipur to Jodhpur we made it a day trip. In hindsight we realized that driving would have been better than the puke fest of a flight that it turned out to be, but that is a story for another post.
The drive from Udaipur allowed us to enjoy the countryside. As we drove out to Kumbhalgar we got a chance to see the agriculture of the countryside and some of the country life in the region. I may have enjoyed this more than Caitlin, as after a couple of hours of racing around corners and up and down hills Caitlin wasn’t feeling too hot.
A little background knowledge on Kumbhalgar fort. It was constructed in the 15th century by a Mewar King. It contains roughly 360 temples within the walls. These temples however are not massive rather they range from the size of a pagoda to a small house. They are a mix of Jain and Hindu temples. This was about all the information I was able to gather about Kumbhalgar as we did not have a tour guide, especially since there were none as it was hot as buckets.
I realize this post is lacking in historical depth an impressive site none the less and I’ll let the pictures tell the rest of the story.
The picture Caitlin has taken to calling “Country traffic Jam”. She did not mention that her head was between her legs due to the motion sickness. 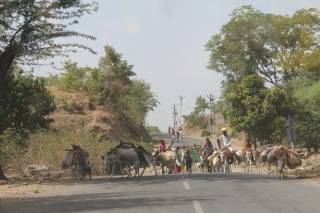 The Entrance to the fort.

Two of the temples, the one on the left is a Jain Temple. 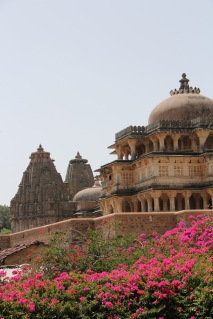 The wall surrounding the fort and the temples.

Trees had taken over parts in the courtyards.

The doorways were awesome.

Caitlin posing for a picture and managing to not sweet profusely. 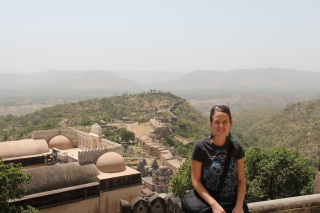 As you can tell it was difficult to open our eyes. I had a white ring of sweat on this hat every day.

The wall running into the distance. It is about 15ft thick.

Caitlin walking in the fort. The interior did not have much decoration. 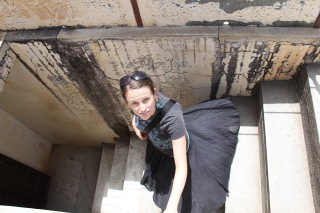 Another view of the wall. 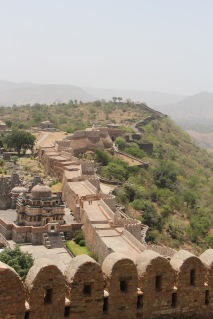 Flowers in front of the fort. 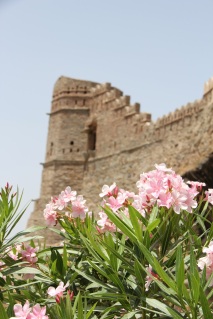 Looking up at the fort from the outer wall. A difficult task to consider conquering. 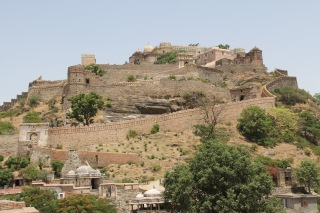 I thought I would give it a shot. Realized I didn’t have the right shoes though. 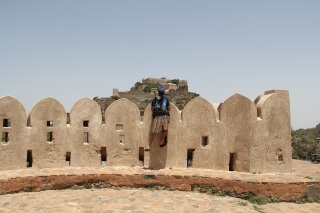