April 12, 2012June 5, 2014 • Caitlin
This spring break we headed to the Philippines to visit Ximena and Daniel as they are now living in Subic. The took off a couple of days to go site seeing with us and drive us all around Luzon. They took us to what turned out to be the coolest part of our trip which was Banaue. While Luzon might not be a gigantic island it is quite mountainous making getting from Subic to Banaue a much longer trip than it looked like it would be on the map. The ride there took longer as we swung through Bagio. We spent the night there and took in some sights from the hills. We didn’t spend too much time there as we were getting nervous as to how long it would take us to get the rest of the way to Banaue as we were receiving conflicting predictions as to how long it took to drive. When we finally got to Banaue the weather was overcast but we tried to make the most of it by heading out to the viewpoints. Unfortunately we didn’t get much of a view. We swung by the local museum which was tiny and got some background on the early residents of the area. It turns out that they were very short and were fairly militaristic, other than that we didn’t get much info. The following day we hired a Jeepney to take us to see some of the terraces and to hike through them. A Jeepney is a jeep that has been constructed by a local mechanic. We were told we were going to need one as the roads weren’t passable in a car. As we took off on the paved road I thought we had been had, it was at about this point that we started going off road and I quickly realized that there was no way we would have been able to drive it alone, especially as the road turned into mud and narrowed to a one lane road at times. The jeepney took us to our starting point and then our guide Alex(and no I am not referring to myself in the 3rd person) took us for a walk through the rice terraces. He pointed out different insects and explained to us how they used snails and fish as natural ways to prevent pests and weeds. He explained to us how the oldest son would usually get the largest and best terraces and that was why he as a younger son had to find an outside source of income. He also mentioned that it is highly frowned upon to sell terraces to outsiders. The tour was beautiful and one of the coolest things about these terraces is that some of them are 2000 years old and they are still in use. The notion that terraces from the time of the Roman era could survive so many years is amazing.
The first day at the lookout point. As you can tell it was a touch cloudy.

Daniel and Nicole walking along the edge of the terraces.

Ale ventured out to try to get a better look.

The lookout of the rice terraces from where the 1000 peso image is taken from. This was taken the day we were leaving, a little bit better view.

Another view from the lookout. 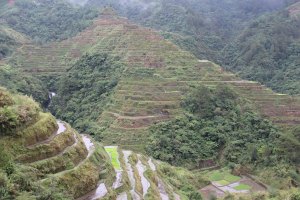 The lookout without the clouds. 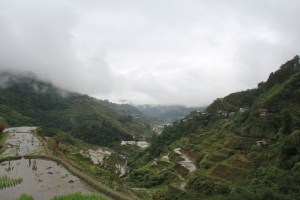 All of us in the back of the Jeepney. As you can tell by the blurry pictures it was rather bumpy and difficult to get a good picture. 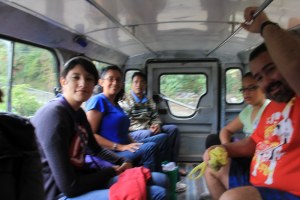 The road we took to the rice terraces.

The jeepney we took to the rice terraces.

At a view point from the road.

I man harvesting a root that apparently helps indigestion.

Rice Terraces with an irrigation ditch running through. 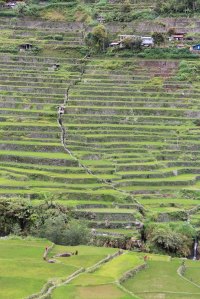 Daniel and I during our hike.

Young rice ready to be planted. 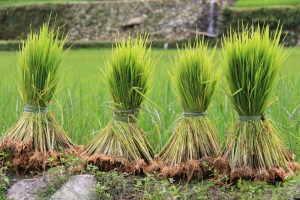 Walking along the rice terraces.

Looking out on the rice fields.

Caitlin in front of the Terraces.

Whats a walk through the rice terraces without a dip in the hot springs. 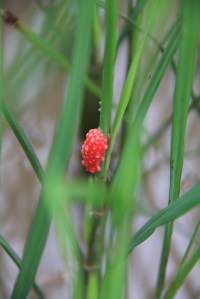 Looking down on the rice terraces. 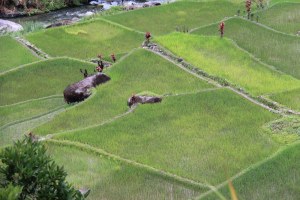 Looking out on the rice terraces.

Me in front of the rice terraces. 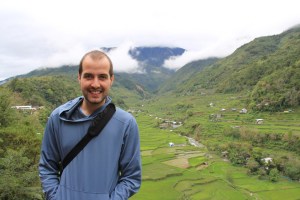 Another picture of the rice terraces.

You’re probably getting tired of the rice terraces but they were so amazing it was hard to capture the beauty of being surrounded by them all. 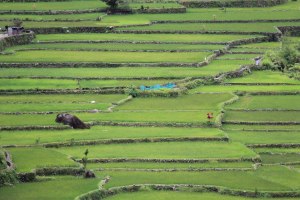 As you can tell the clouds didn’t let the sun get through much.

Another view of the terraces.

Another top down view. I loved how they weren’t symmetrical.

A side view of the rice terraces.

The view from our hotel. 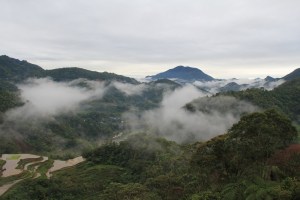 Another view from the hotel.