September 24, 2011June 5, 2014 • Caitlin
Went to my first soccer game today in Korea. It was Seoul Fc vs. Daejeon and Seoul slaughtered them with a 4:1 win. The soccer was not amazing but the atmosphere was fun and getting a chance to see the world cup stadium was fun. The stadium is pretty far out of Seoul but is a beautiful stadium with a nice location. Lots of good views as you enter the stadium and a fair amount of green space around it. The game, as I mentioned before was not the best soccer I’ve seen but was entertaining none the less as there was a lot of goals. Every time Seoul FC scored they shot off fireworks. Whoever was in charge of shooting off the fireworks got a little over excited and shot them off before what looked like it was going to be a goal, the shot went wide causing the crowd to go wild in laughter. The fans were into the game but it wasn’t nearly as intense or packed as games in Latin America. None the less I hope to get to another game while here.
The entrance to the stadium. 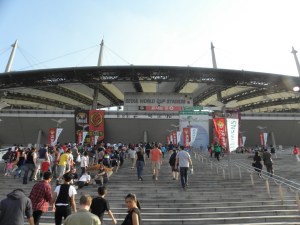 Artsy Fartsy shot. It was a beautiful day for a game. 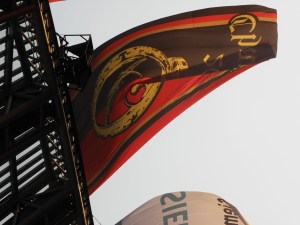 The stadium from our seats. It was pretty empty so we got good seats for cheap.

Cheerleaders. I am quickly realizing that all sporting events in Korea have cheerleaders.

Me and Pedro at the end of the game. I picked up a jersey to go with the collection. 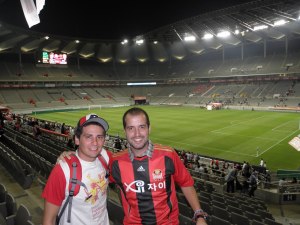 The team after the game went over to their fans and bowed. I wasn’t quick enough to get the camera out but here they are walking off the field.