April 6, 2010June 5, 2014 • Caitlin
When I was a kid I watched a little movie called “Romancing the Stone”, this movie skewed my view of what Colombia was. With time I realized that Colombia was a little different than I had imagined, but I was sure I would still be able to find a big ass emerald. Turns out Hollywood lied again, who would have guessed it, from now on I’m only taking my news from Fox, nothing but honest reporting. After getting over the disappointment we began to explore Cartagena. It reminded us a lot of Havana but smaller and a little better maintained, with more food options. While in Cartagena we wandered the streets and enjoyed the colonial buildings and all their bright beautiful colors and the cobblestone streets. This lasted for about 7 minutes before the quote of the trip is “Damn its Hot!” was first spoken, it would go on to be repeated innumerable times. Caitlin and I had forgotten how hot and humid things can be. It wasn’t until we were in air conditioning that Caitlin said “I really like the hot humid weather it makes my skin feel less dry”. I’m pretty sure she was lying since there is no way she could possibly feel her skin which had melted off her body and was left on the Spanish fort we had visited that day. The fort had been constructed to protect the bay Cartagena is in and has been well preserved so we thought why not go check it out. Too bad we were sweating as there was no shade around. We kept wondering how the soldiers did it, we determined there must have been more tents on the top. In order to cool off we wondered through all the tunnels within the fort. After the fort and about 2 liters of water we managed to site seeing and saw a fair amount of Cartagena on the first day of vacation, we left the following day for the beach but got another afternoon in Cartagena the day before we flew out. The second afternoon in Cartagena we managed to find a decent hostel quickly so we were able to venture out into the sun once more. First stop was to find a Christmas ornament for the tree, which we managed to find in a touristy shop located in dungeons in the old city walls. After finding our Christmas ornament we tracked down the restaurant I had read about, Anthony Bourdain had eaten at it when he was in Cartagena, its called the Cevicheria. They are known for making a Shrimp Ceviche were they put mango and passion fruit into it, its called the Douglas. Don’t know if it is in reference to romancing the stone but it was delicious. After dinner we walked along the old city wall and tried to watch the sunset, unfortunately there were too many clouds near the horizon. While we didn’t see the sunset we were able to see a few weddings, with all the guys dressed in the traditional white guayaberas and white linen pants. We headed back to the hostel as the sun went down and got to bed early as we had a long day of traveling back the following morning.
One of the old colonial buildings.

The fort from the outside.

The tunnels in the fort.

An old ship you could rent out for parties, not worth it for just a drink. 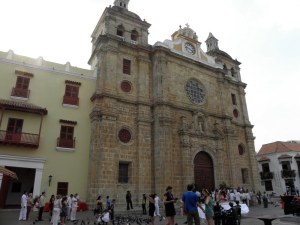 Ceviche with Mango and Passion fruit.

Picture from the wall, if you look carefully people playing soccer. 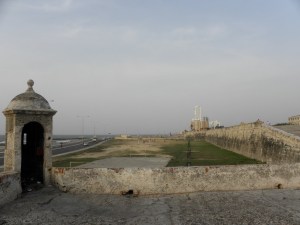 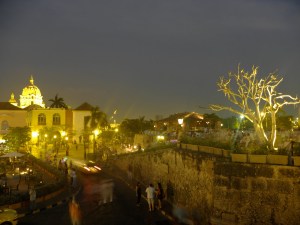 Sun setting on the wall. 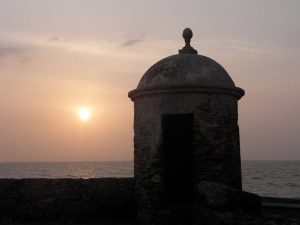 Caitlin on the wall.

One thought on “Cartagena”