November 7, 2009June 5, 2014 • Caitlin
There have been several times since moving to Quito that people have asked me if I have tried colada morada. My usual response is to politely say no and then wonder what on earth a colada morada is! I finally figured it out last week since this drink is apparently a seasonal Halloween/Día de los Muertos type of thing.
The school provided snacks for us teachers on Wednesday and the student council repeated the process for the kids on Friday so I was treated with two tastings of the traditional drink and the bread that goes with it.
A colada morada is a thick warm berry drink with chunks of fruit in it. I was a bit confused by the name of the bread at first since guagua, a quichoa word, is also what students are sometimes called by Ecuadorian teachers, but I soon figured out that this is because the bread is shaped like a baby.
These guaguas de pan were on display in the window of a panadería. I never remembered to take a picture of the ones I ate until after their heads were already gone. They are filled with either mora (berry jelly), chocolate, or cajeta (a thick syrup of caramelized milk).

One of my 10th graders kindly displaying his colada morada and guagua de pan. Notice he is not actually inside my room and doesn’t appear to be working….Friday was a bit of a wash with a half-day and Halloween combined. Once the parade of primary students in costume started and the snacks arrived, I pretty much gave up. 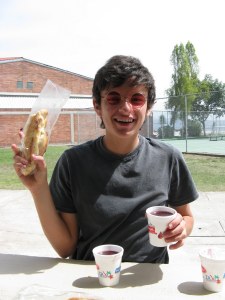