October 16, 2008June 5, 2014 • Caitlin
The sky is falling! The sky is falling!
or at least the ceiling is….
A whole lotta rain, combined with some shoddy craftsmanship in the new middle school, has led to some interesting events over the last few weeks.
While we were in Guatemala last week there was a crazy storm in San Pedro Sula and apparently part of the ceiling in the new middle school couldn’t quite handle it. All of the water from this section of the roof is funneled down one very small gutter pipe (see it in the below pic…). The assumption here is that the water just couldn’t drain fast enough and the weight created this crack in the ceiling. 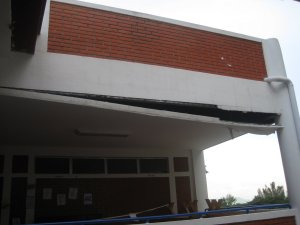 Luckily, our trusty seventh grade SS/LA teacher who utilizes the nearest classroom was very vigilant and put up some tape so the students wouldn’t go under the perilous ceiling. The tape has been up for the last week while the administration and maintenance staff tried to figure out the next step in repairing a building that was only finished 9 months ago.

Meanwhile, we are in the midst of a tropical depression here in Honduras right now. That means lots and lots and lots of rain! It started last night and didn’t take a break until this evening….and if you remember our post from last spring, when it rains in Honduras, it pooouuuurs! All this additional rain really did a number on the already precarious ceiling and here’s what we ended up with at the end of the school day today: 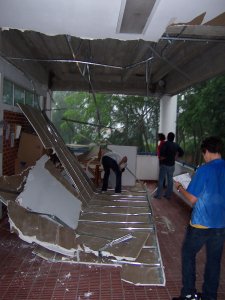 Luckily, nobody was under the ceiling at the time! I have to admit though, that I’ve been looking up a lot more often than I used to and there is an awful lot of peeling drywall around the building….hopefully this will just be a solitary incident and we won’t be running around like Chicken Little for the rest of the year.

*No need to promote plagiarism while I’m trying to teach the kids not to do it so kudos to Dan and Jesse for the photos!