June 28, 2010June 5, 2014 • Caitlin
The final semester project for my 9th graders focused on drawing faces in proportion. They all began by drawing a face in proportion, but then, in an attempt not to stress the students out with the task of drawing a face realistically, I gave them the choice of finishing their project in a Cubist style if they wanted. Teaching a concept and then giving them choices on the project they create with the concept is something I hope to do more of next year. It’s something I’m not used to from teaching younger kids, but I think it provides the opportunity for more creativity and independence.
Interestingly, more kids chose Realism than Cubism which I think was mainly due to the fact that it seemed “shorter” since the Cubist route required coloring or painting and in some cases cutting and gluing. They also, in general, struggled with Cubism because once they had drawn the face so well they were hesitant to cut it up for fear of ruining it. This was very reminiscent of a project I did in college where every student learned basic woodworking techniques by making the exact same table. Our next assignment was to use the table to create something else so we all had to cut our tables apart! It was painful to destroy something we had so painstakingly created when we weren’t sure how the second item would turn out.
I will have these same students again next year, so hopefully I’ll be able to work with them on self-confidence and taking risks. In the meantime here are some of their portraits.
Realism: 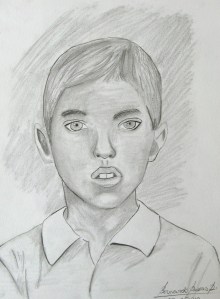 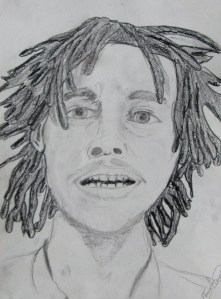 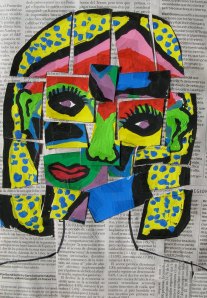